Peel back the glamour of Mykonos and you’ll find a maze of charming streets, delicious eats and beach after idyllic beach, discovers luxury travel expert, Dominic. Having recently returned from the Greek island, he breaks down exactly what it is all about.

I am a huge fan of Greece and have travelled there regularly over the last few years in search of its beautiful, empty beaches and classical culture. My most recent trip would be something a little different as I was called to Mykonos to see some fantastic new hotels and get under the skin of the island’s best restaurants and beach clubs. 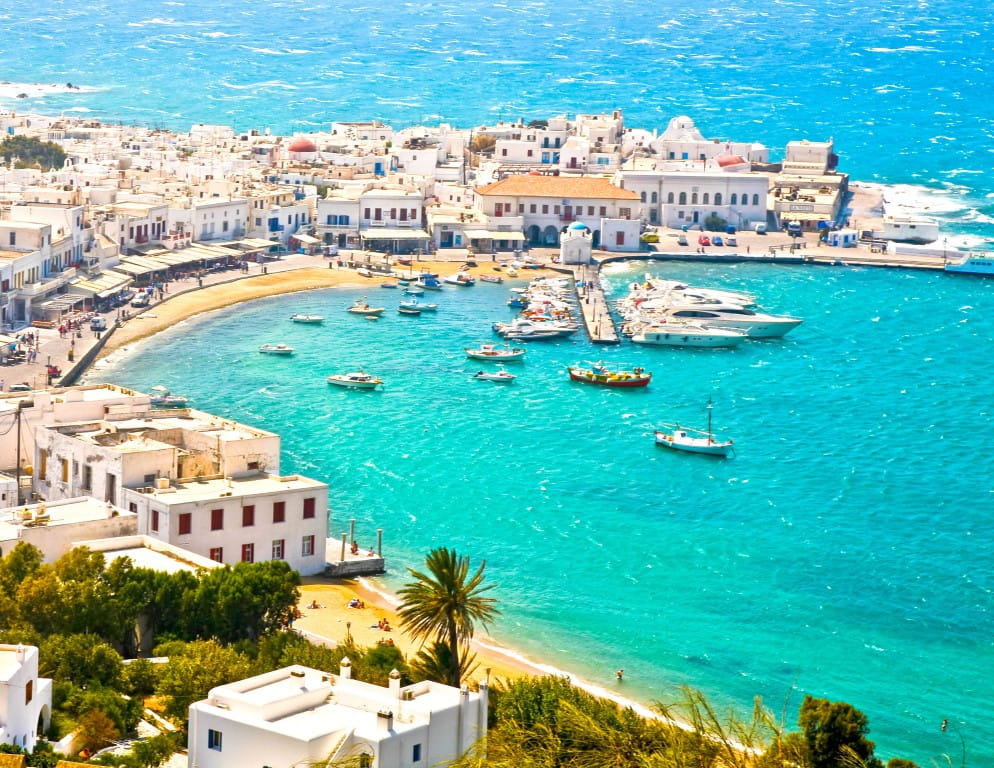 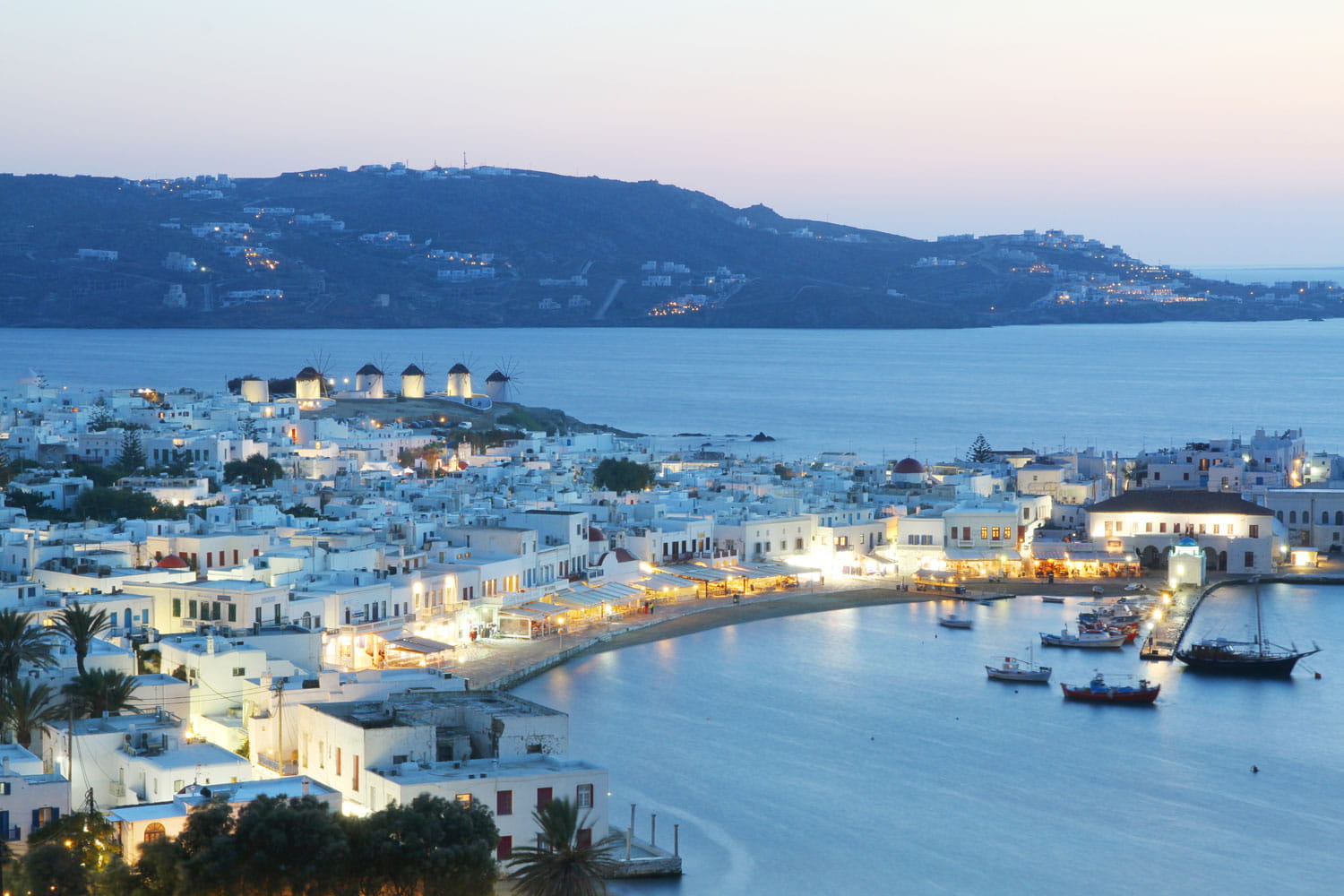 Our poor car was pushed to its very limits on Mykonos’ roads. The little VW engine huffed and puffed its way up steep hills and the suspension was truly tested as we traversed rocky dirt roads en route to various villas and off the beaten track beaches. Between the quad bikes, the Humvees and the construction vehicles, driving on the island is rarely a pleasure, however the spectacular scenery makes it all worthwhile- for the passengers at least!

Most hotels offer a shuttle service in and out of Mykonos Town and it is relatively easy to take a taxi or organise a private transfer to take you to beach clubs during the day. Our hotels are located between 10 and 20 minutes outside of town whereas villas are more difficult to get to and from. If you are in a large group, plan transportation ahead of time, especially if you want to stay out later in Mykonos Town.

Whilst staying in the villas, it’s best to hire a car to get around. Driving is not easy thanks to the island’s narrow roads, steep hills and busy traffic but it will allow you more freedom during the day. Alternatively, if you are content with spending time relaxing in and around your villa, you can easily organise trips to beach clubs or Mykonos Town on certain days. 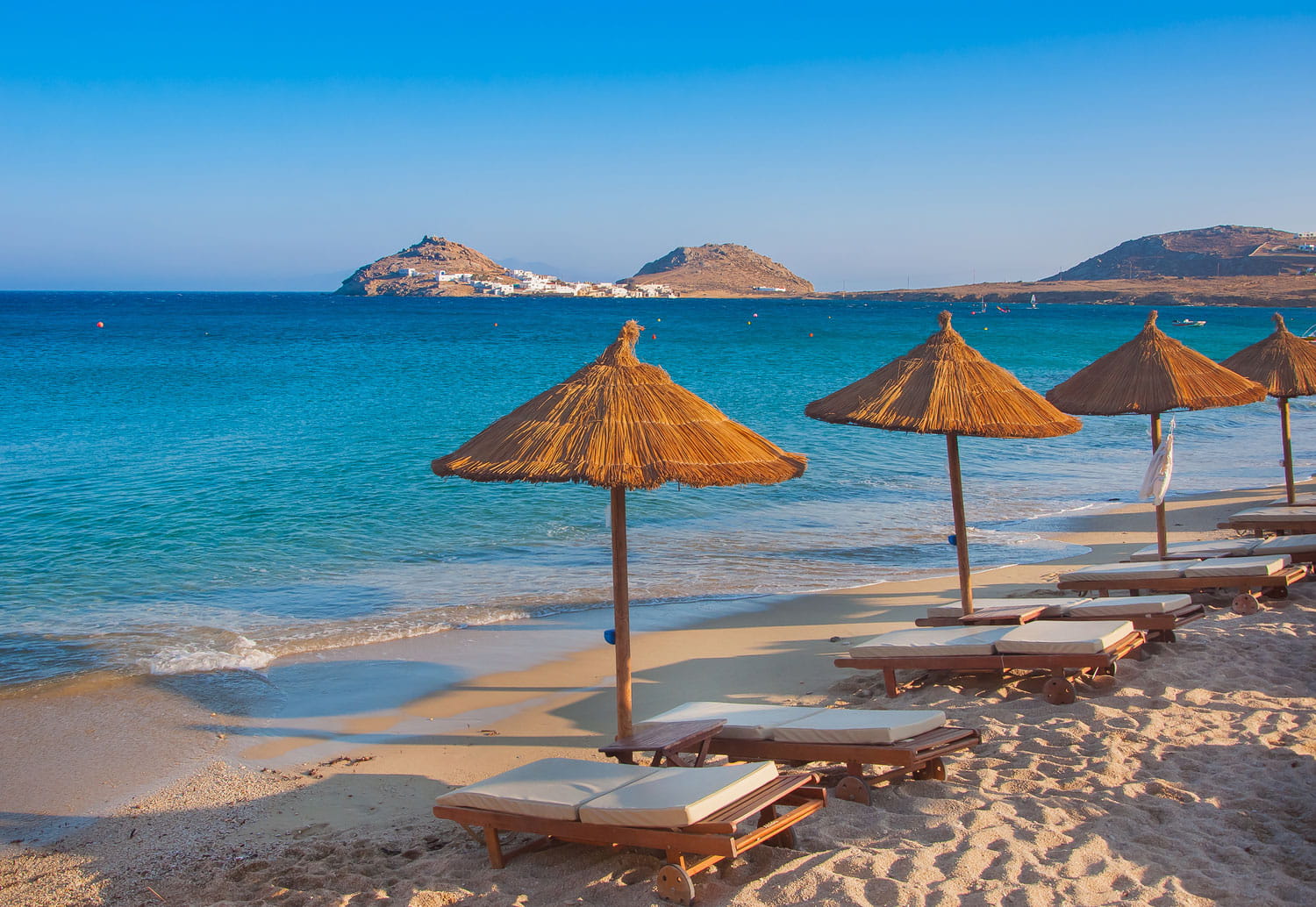 Take a day trip to one of Mykonos' beautiful beaches 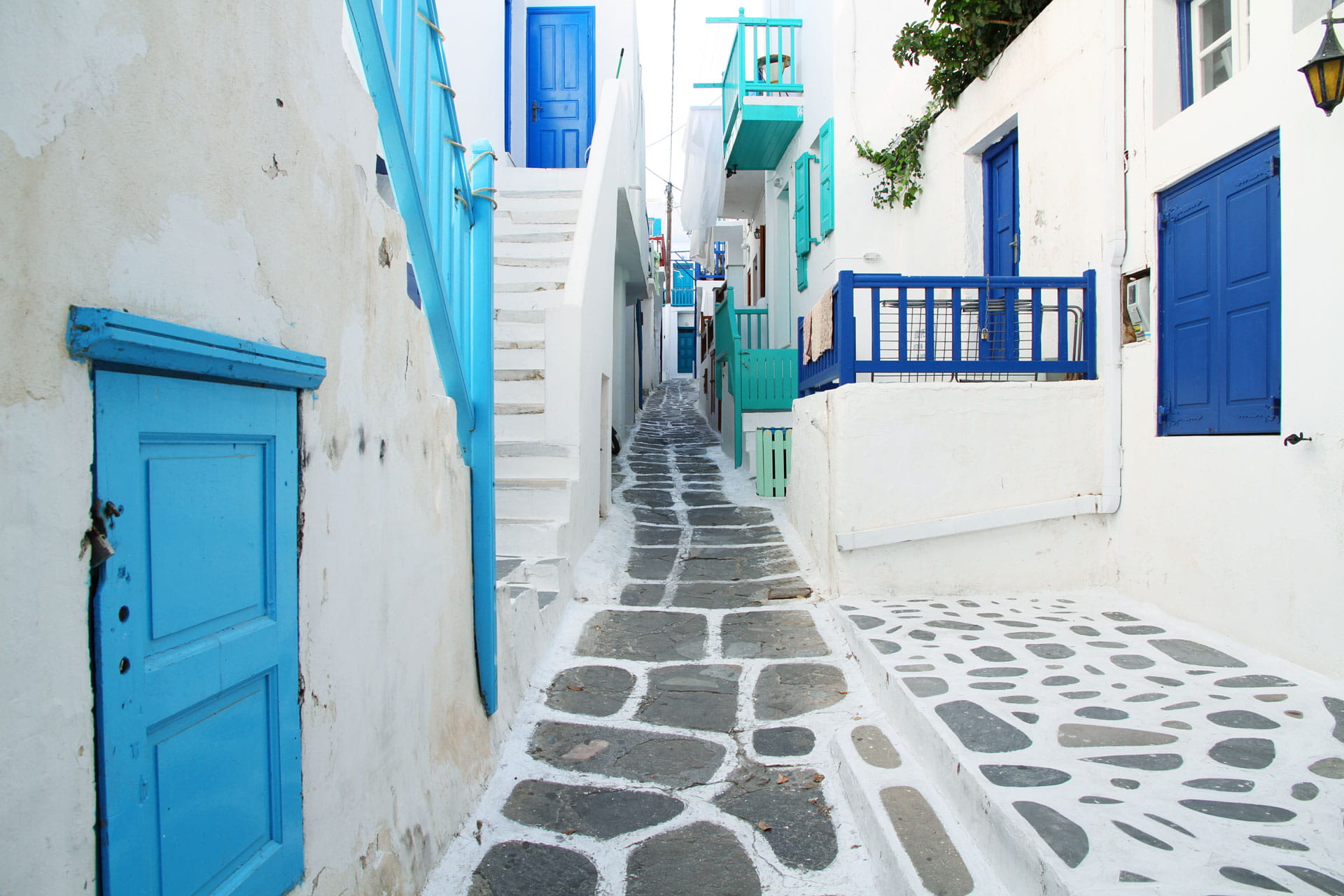 Get lost in the labyrinth of cobbled streets in Mykonos Town

The island is home to some of the best beach hotels in Europe, no matter whether you’re in search of peaceful seclusion or a perfect party crash pad. The majority of hotels are located close to, but not within walking distance, of Mykonos Town. They are primarily located on the southern coast of the island, sheltered from the almost constant north wind which whistles across Mykonos during the summer months. Most hotels will have one or two options for dinner within walking distance so you are rarely isolated.

Santa Marina is the most luxurious resort on the island and is located within walking distance of Ornos which is Mykonos’ second biggest village and home to a handful of good restaurants and shops. The hotel is perfectly set up for families with its own sandy beach away from the masses. It’s a popular spot with the superyacht crowd, I think I counted fifteen moored up in the bay whilst at the hotel’s waterfront restaurant, the Buddha Bar, as an international DJ manned the decks in the background. 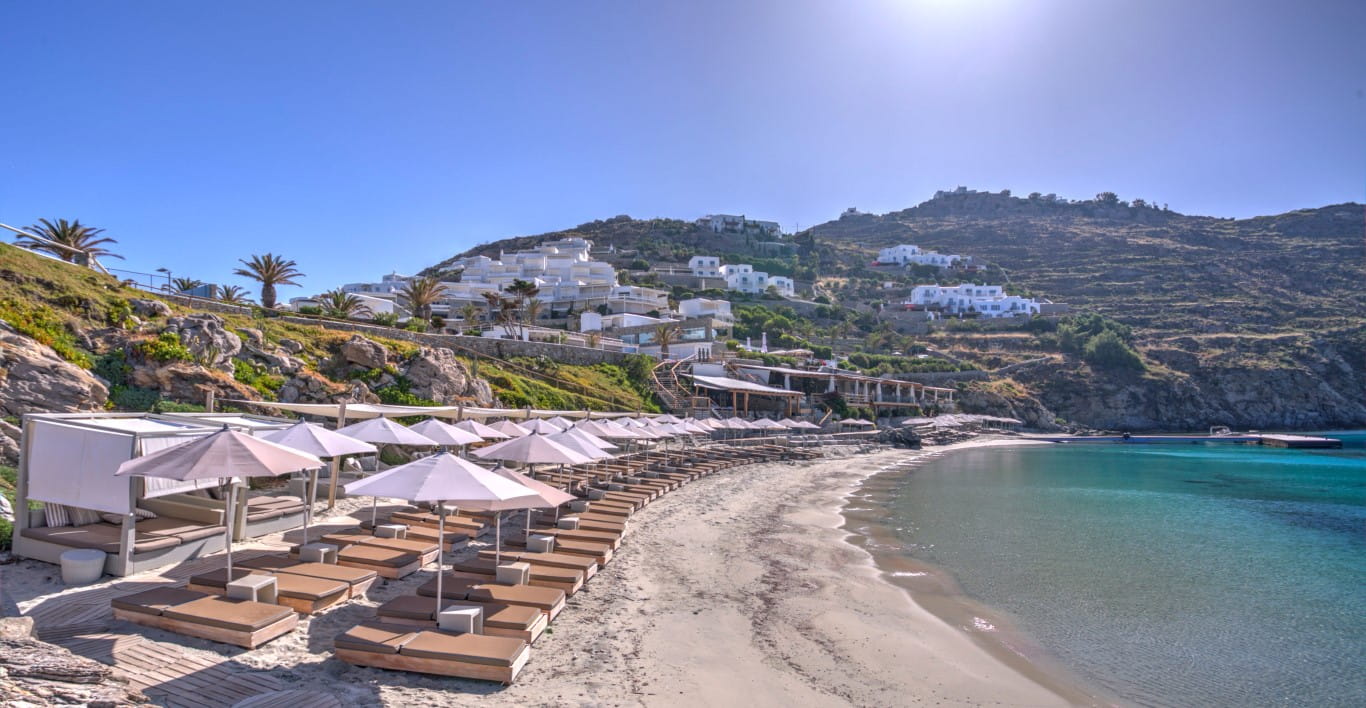 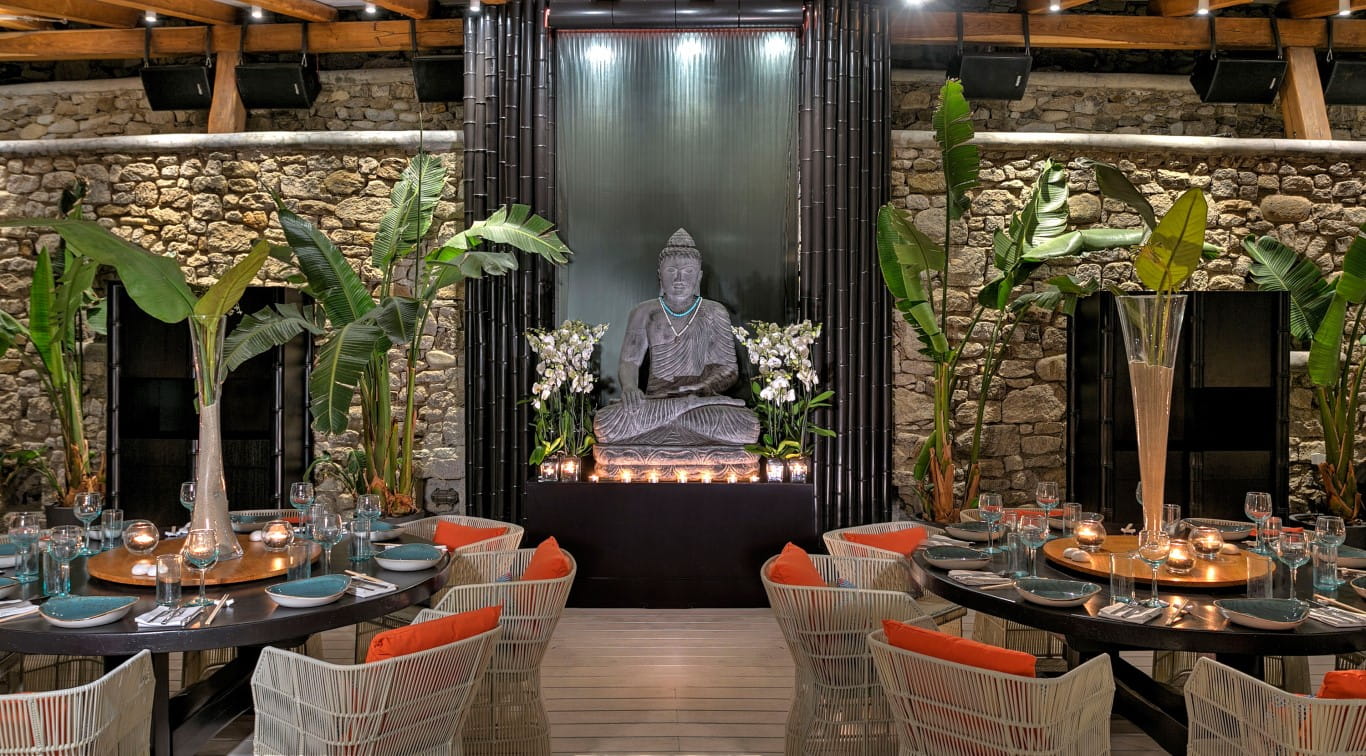 Also in Ornos is the Kensho Hotel which is ideal for those looking for a super stylish base from which to explore the best of the island. Its restaurant has the most incredible tasting menus that totally blew me away and seemed almost out of place in a small boutique hotel. It is not located on the beach so definitely more suited to those who want to get out exploring and spend days lounging at one of the island’s beach clubs. The small courtyard pool is still great for a spot of chilling out but you wouldn’t sunbathe there all day. 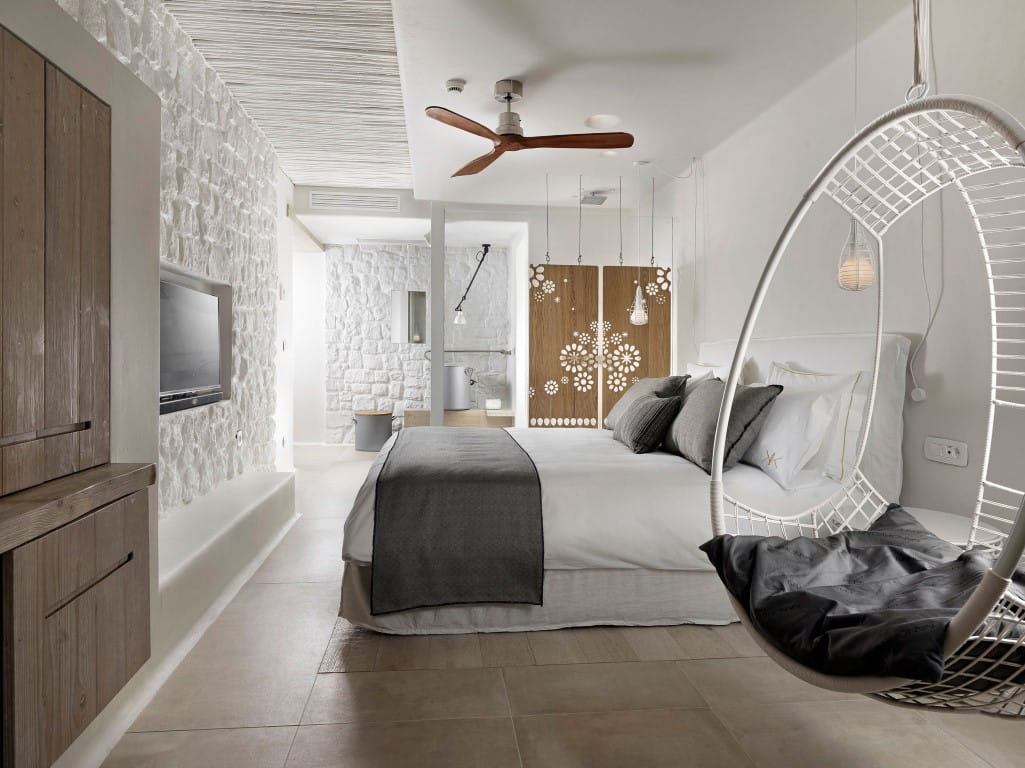 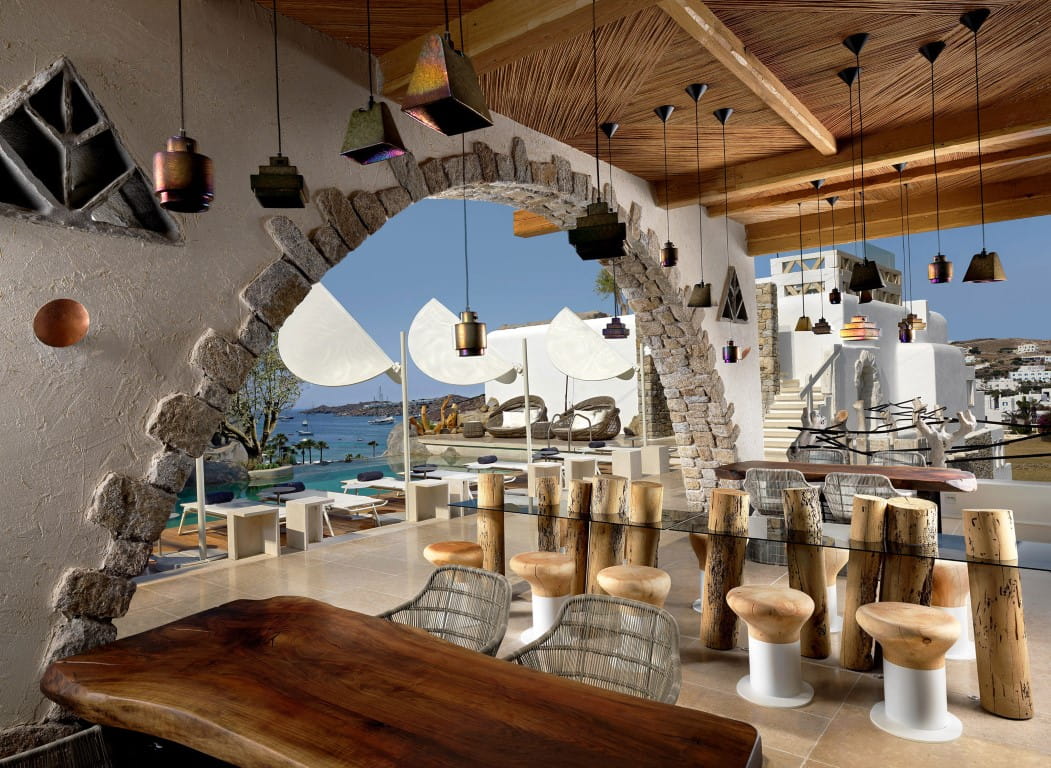 The Mykonos Grand is located just around the corner from Ornos Bay and caters really well for a more relaxed crowd still looking for luxury but wanting something more traditional. Its serene setting overlooking the beach of Agios Ioannis and accommodation in idyllic whitewashed hillside buildings make it the quintessential Greek retreat. 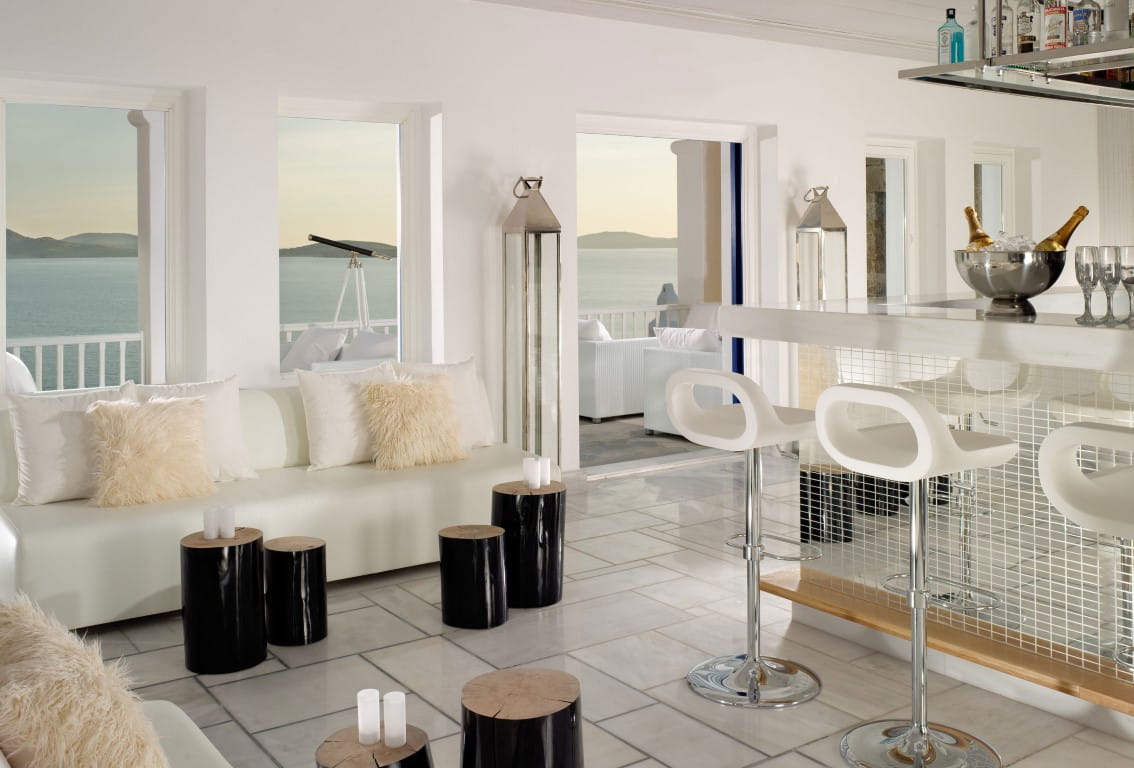 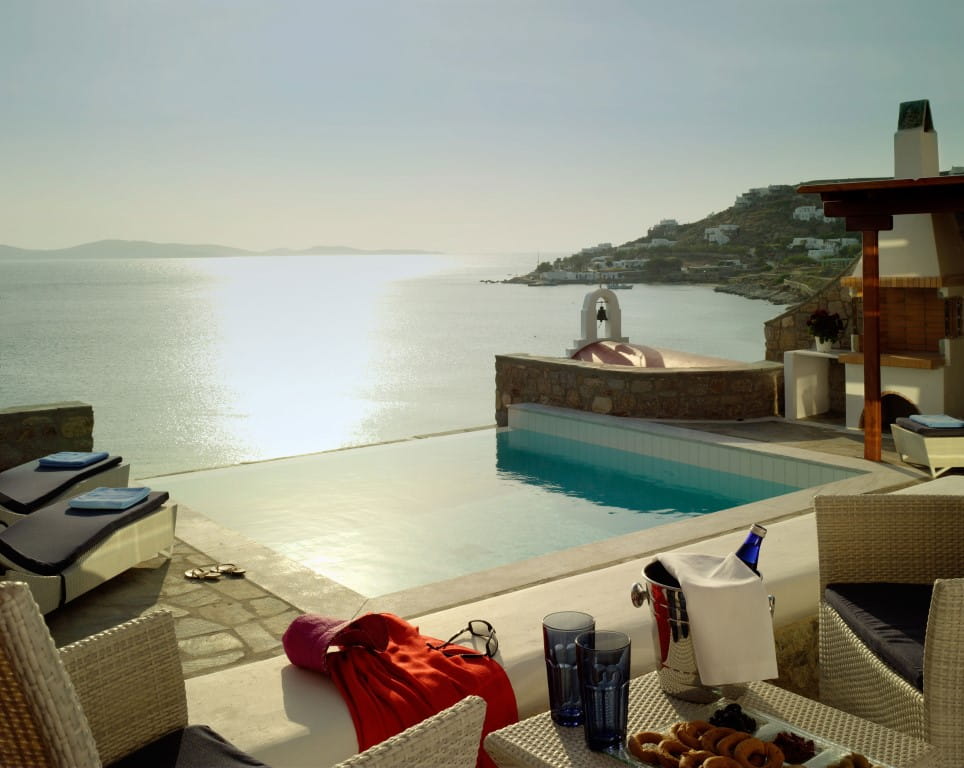 Larger groups may be interested in villa stays on the island. Prices, location and amenities of the villas vary immensely so I spent some time travelling to different parts of the island to see what each location has to offer. Some of the positions of the villas are truly spectacular, perched high on hills with mesmerising, uninterrupted views out to the Aegean. The majority of the villas I saw were not within walking distance of any restaurants or beaches so they work best as a base from which to do day trips.

If you’re in search of a more rugged and beautiful Mykonos, away from the crowds of Mykonos Town, a villa further north can be a great option. The further you get from the main thoroughfare, the more the prices come down and the selection of villas in prime waterfront locations goes up. I saw a wonderful villa close to Kalafati Beach only a stone’s throw from the water, surrounded by a small farm with young calves and foals frolicking in the fields, it was idyllic to say the least!

For couples looking for a peaceful escape, there are a couple of small hotels on the island too. My favourite was Kirini My Mykonos Retreat, a small hotel which has been converted from a sprawling private villa is spread out across three separate terraces, all with infinity pools. The hotel’s gardens which are staggered on various levels are heavy with the smell of herbs and pretty wild flowers tangle their way around the terrace walls. It was here that I could really relax and it would make a brilliant spot for anyone looking for peace and quiet but still within a €20 taxi ride of Mykonos Town. They have a small private swimming platform at the foot of the cliffs which you can walk down to for a morning swim. It was wonderful down there until I was nearly blown into the sea by a helicopter coming into land at a neighbouring villa. A gentle reminder I was in Mykonos! 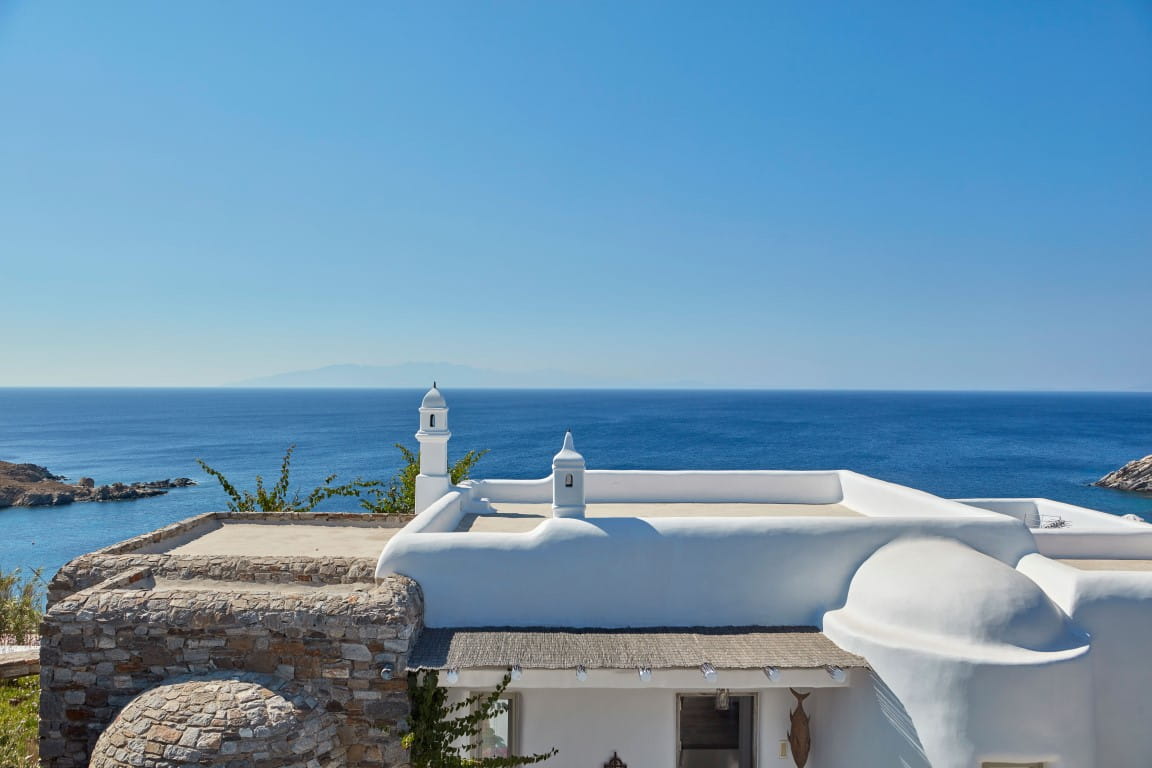 Views from Kirini My Mykonos 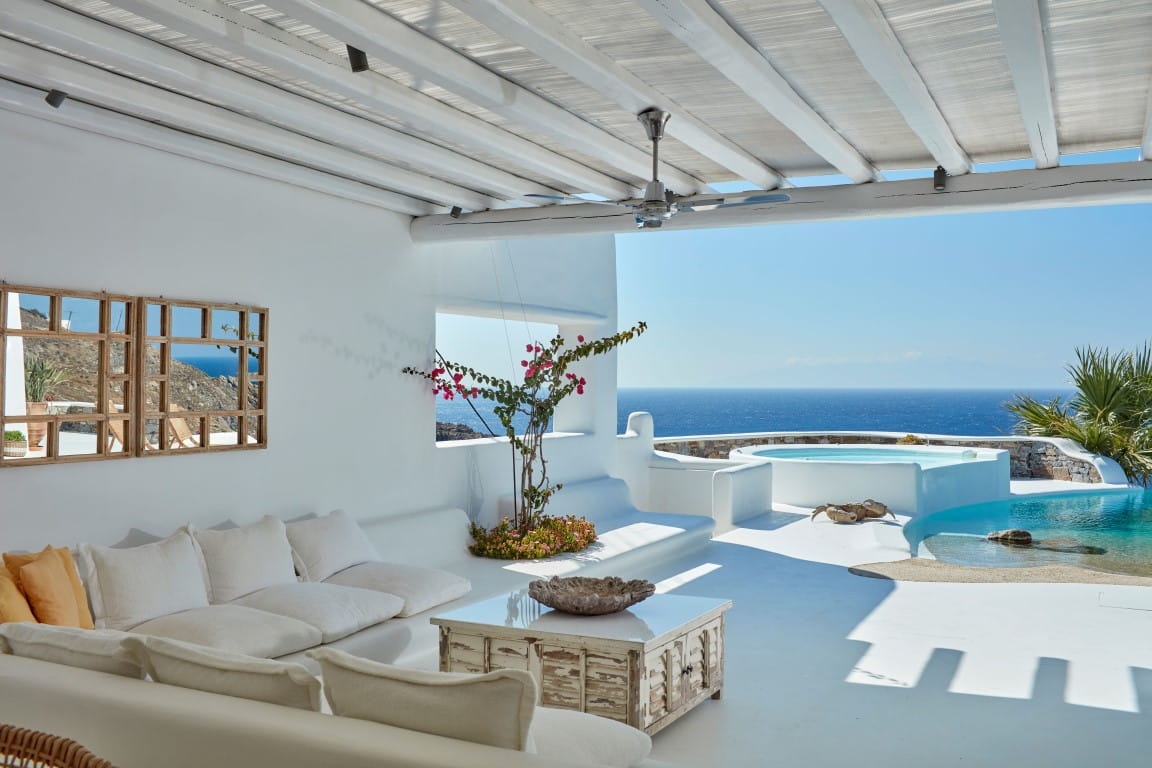 If there is one reason alone to come to Mykonos, it is for the choice of nightlife and restaurants available on the island. There isn’t another island anywhere in the world (except maybe Ibiza and St Barths) that offers such a fantastic selection of high end dining options and places to see and be seen. Beach clubs are the lifeblood of Mykonos and what is so special about the island is that there is really something to suit everyone. 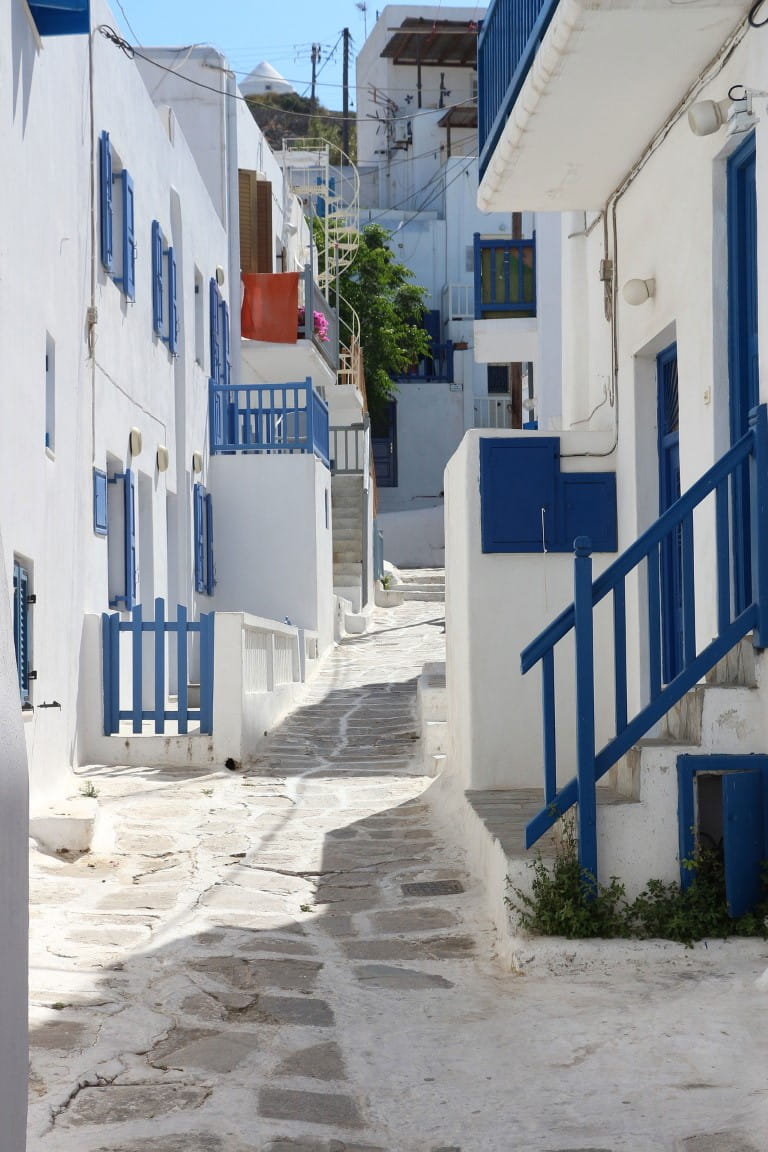 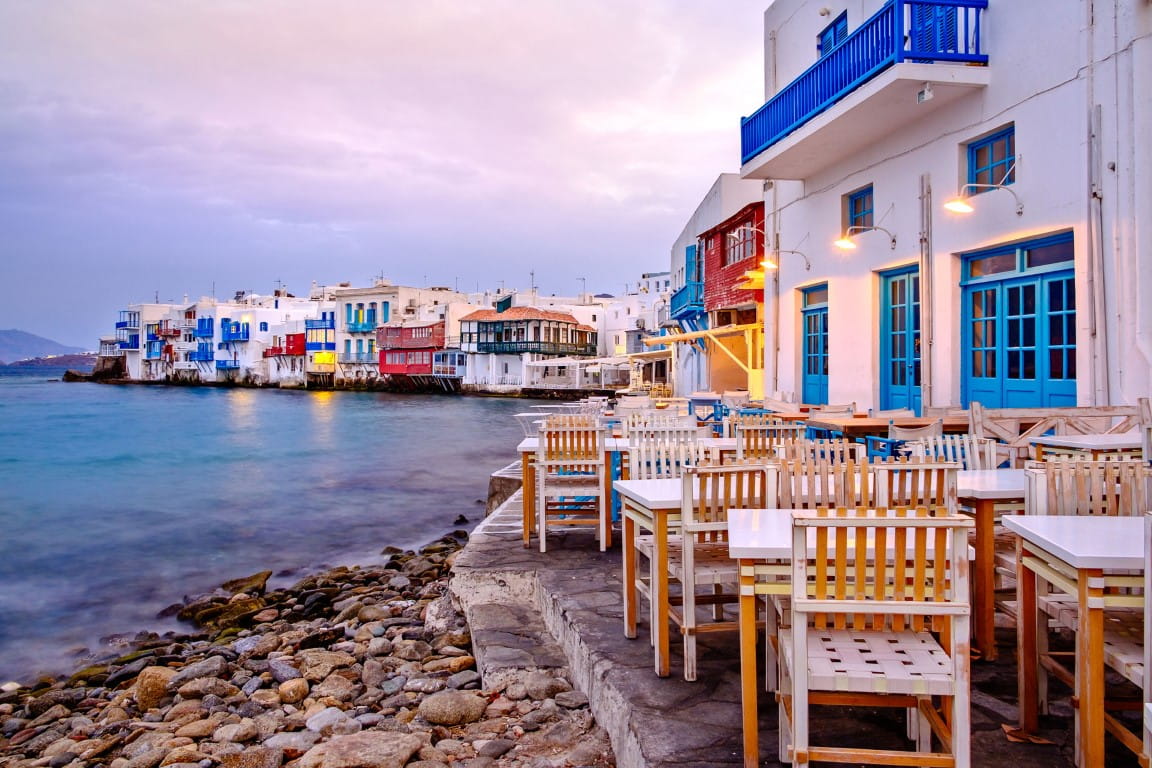 Waterfront dining is in abundance on Mykonos

The island’s most beautiful beach is Psarou and its most notorious beach club Nammos is located at one end. It is THE place to be and securing a table for their best parties requires some serious connections. For something completely different Scorpios is the new kid on the block, has a bohemian crowd with a more chilled but trendier feel. Their restaurant is an excellent choice if you don’t fancy partying too hard, their sunset tribal rituals are great fun and it is a wonderful introduction to the Mykonos scene. It is nice and sheltered despite its location on the north coast and felt a little more grown up and sophisticated than the other options. 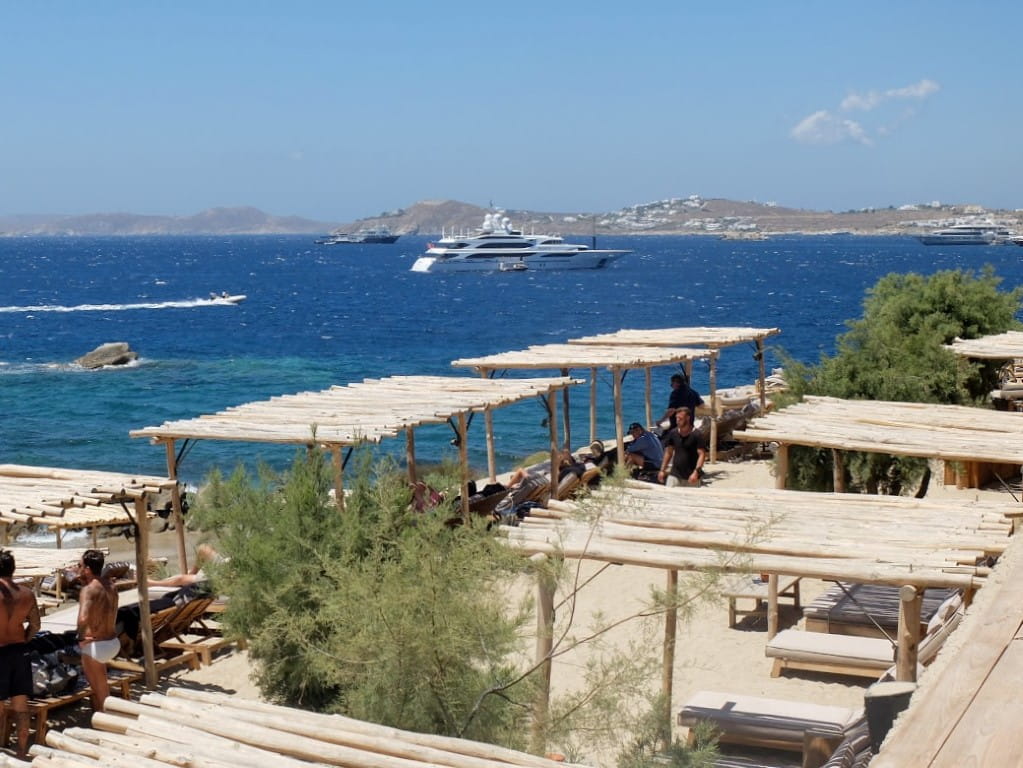 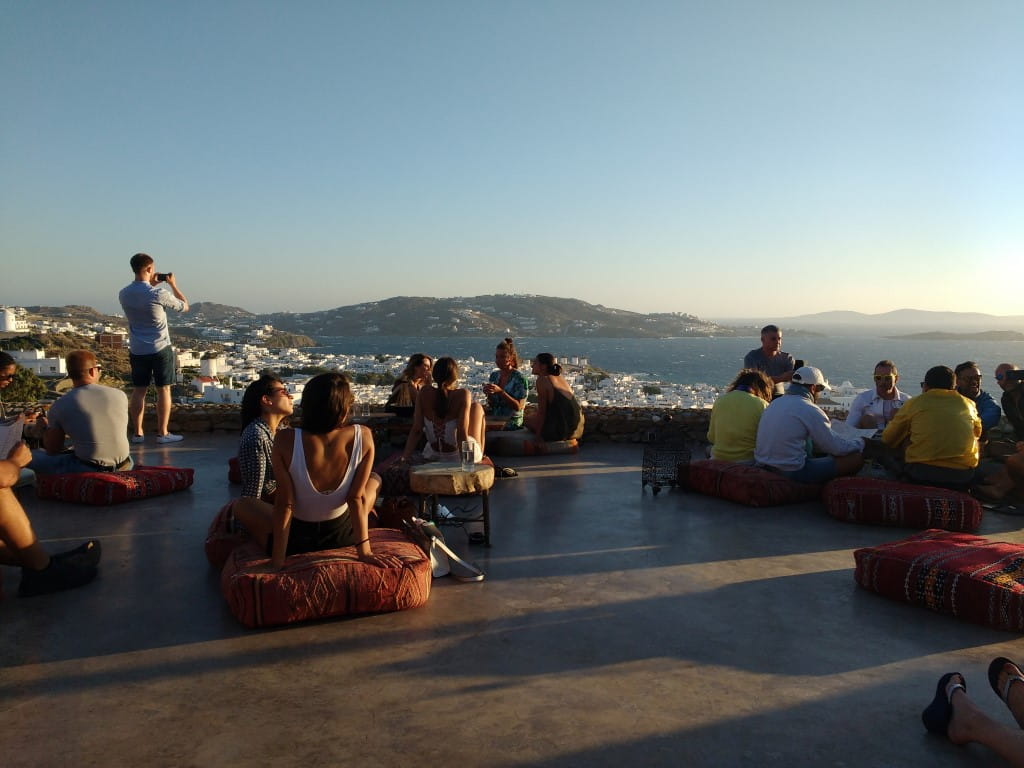 For those wanting to see some of the more remote corners of the island there are two great restaurants worth travelling out to for lunch. Spilia is a wonderful spot for a seafood lunch built right on the water in the very south east of the island about 30 minutes from town. For something more casual there is also Kikis Taverna a charming beach shack close to Panormos Beach that serves the best grilled fish and meats with everything cooked over charcoal. A must if you can put up with the queues…

In Mykonos Town itself, I had the most romantic meal at Remezzo which is in a prime position overlooking the harbour under the moonlight. Interni is where the superyacht crowd go to mingle and Sea Satin is a delight. Right next to the water it is a stunning spot that descends into a real Greek party every night complete with dancing on the tables and the most fun atmosphere. For the best sunset drinks, head to 180 Degrees, a chilled out bar by the windmill above town. It’s a bit of a hike so get your hotel to drop you off there or take a taxi and then walk down the hill into town for your dinner. Finally for the very best food on the island check out Kensho Hotel’s excellent restaurant which delivers Michelin star level degustation menus in a casual setting overlooking their delightful courtyard. 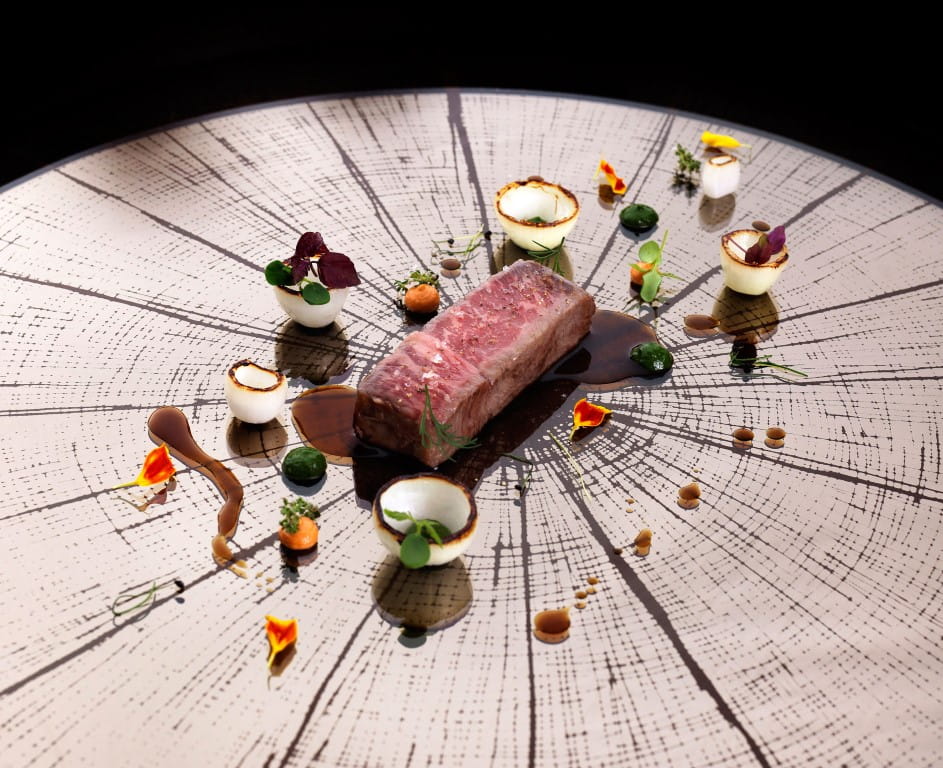 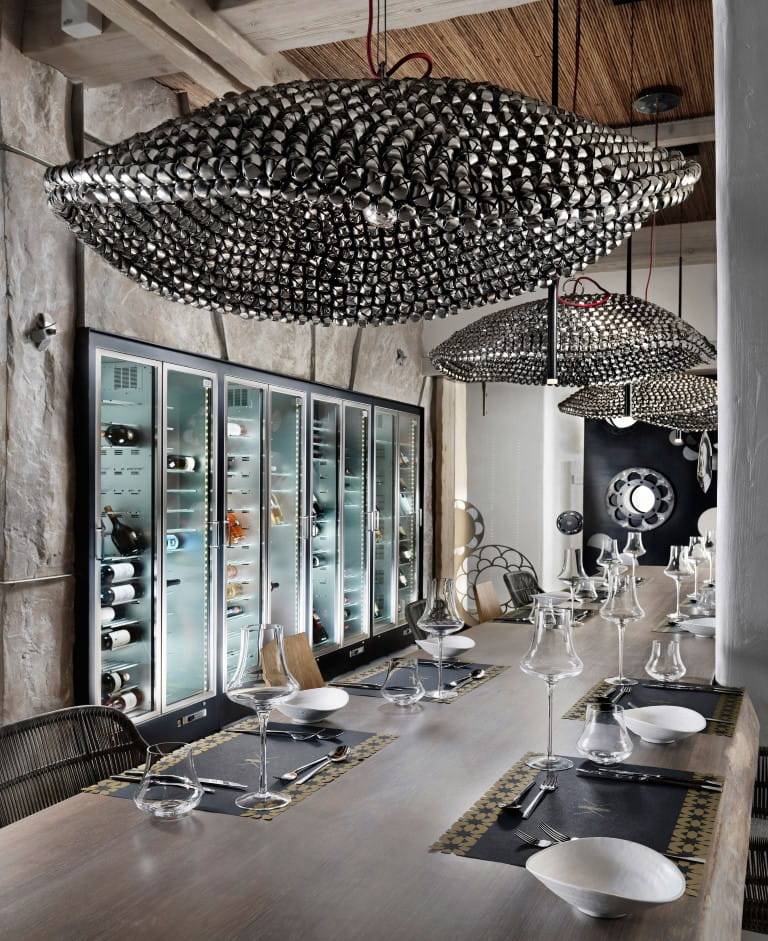 Mykonos is such a special island that truly delivers something for everybody. The key to making the most of it is to know your stuff and ensure you’re in the right place for you. The Scott Dunn Team is here to help you make the right choices and end up with the ultimate Cycladian experience!

This entry was posted in Med, and tagged Greece, Greek Islands, Mykonos.