From Canyons to California

California is ripe for exploration on four wheels. With so very many highlights all squeezed into one state, it is perfect for a self-drive itinerary with a loved one or the family. Website Assistant, Steph, takes us from A to B via some of the world’s most famous driving terrain. California is famed as ultimate driving ...

California is ripe for exploration on four wheels. With so very many highlights all squeezed into one state, it is perfect for a self-drive itinerary with a loved one or the family. Website Assistant, Steph, takes us from A to B via some of the world’s most famous driving terrain.

California is famed as ultimate driving country, and rightly so. With well renowned routes such as the Pacific Coast Highway and Route 66 crossing Californian soil, it is no wonder that motorists flock to the state to get behind the wheel and soak up the fantastic scenery it has to offer. Hiring a car is an amazing way to really get to grips with a place, giving you the freedom to explore the many hidden gems of North America on your own time.

My road trip began in Nevada, starting in the fast- paced hub of Las Vegas before winding its way north through the national parks of Death Valley and Yosemite, stopping off in Lake Tahoe and finishing in my all-time favourite North American city, San Francisco. A truly unforgettable trip jam packed full of adventure, celebrating both the great outdoors and the glamour of the Golden State. 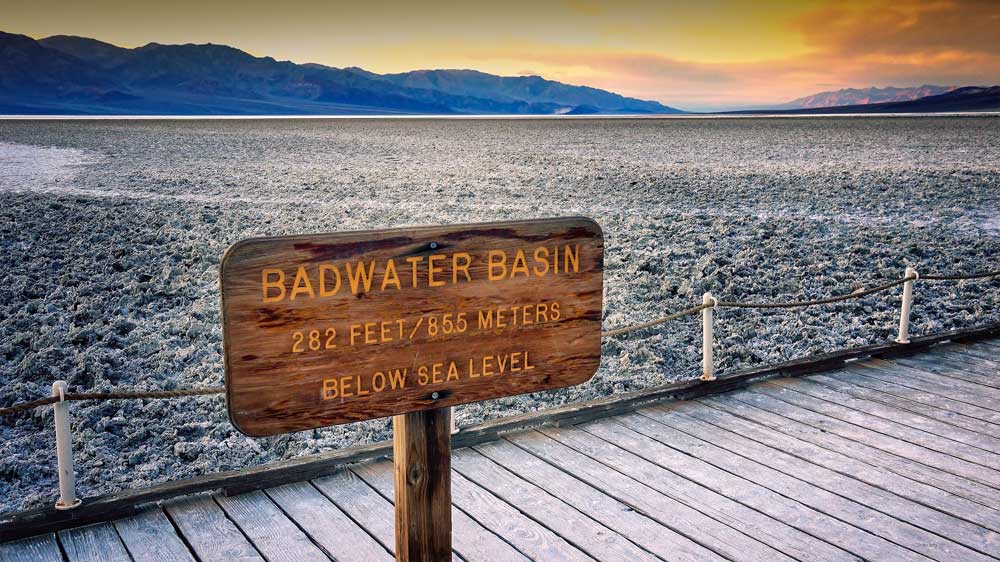 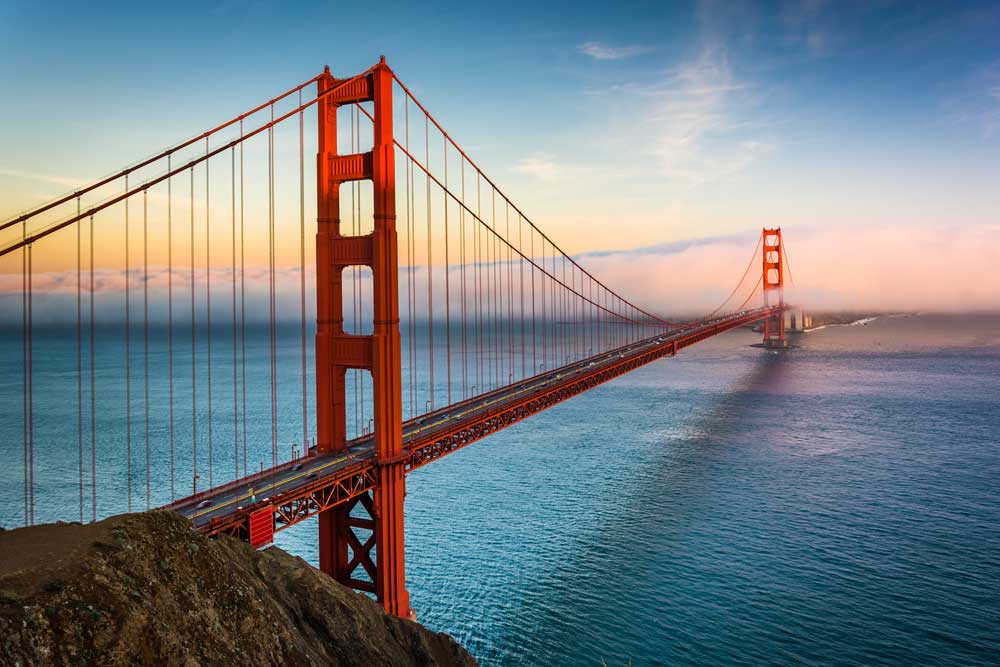 Las Vegas, in all its glittering glory, is a completely mind boggling place. Whilst Nevada’s capital revels in its reputation as the city that never sleeps, there are a seemingly limitless number of activities to enjoy both day and night during a city break there. For me, the highlight was undoubtedly a day spent white- water rafting down the Grand Canyon, getting up close with the rusty red rock as we dipped and dived through the swell on a real white-knuckle ride. Once back on dry land, we were lifted into the sky by an awaiting helicopter for another adrenaline fuelled journey. On board, we coasted the floor of the canyon until our pilot hauled us out of the gorge, skirting the canyon walls before emerging over its rim and heading back towards civilisation. 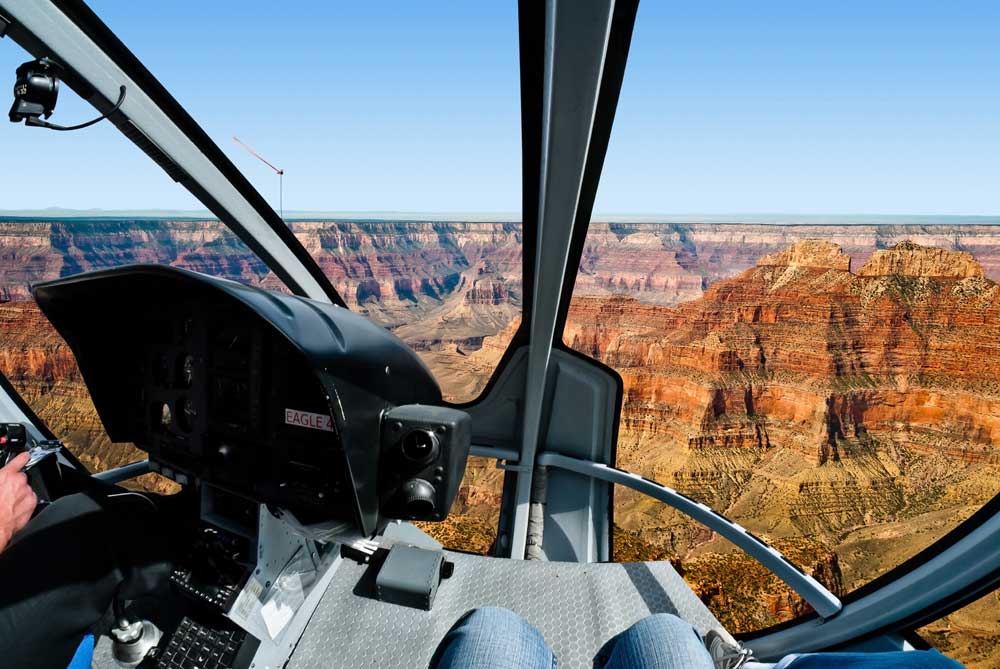 Soaring above the Grand Canyon 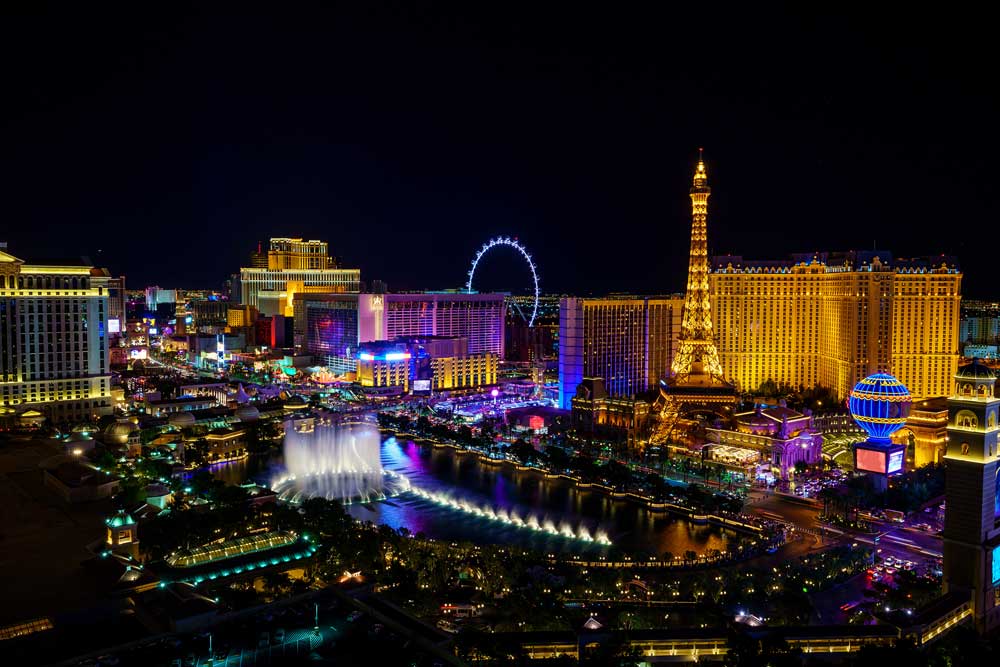 Stealing myself away from the bright lights of Vegas was bittersweet yet the adventure had only just begun. So, I readily swapped the comfort of a hotel on the iconic strip for a considerably less glamorous hatchback and headed west towards California. Passing through Death Valley National Park and its otherworldly landscapes of scorched earth and moon like craters paired with the soaring temperatures were like nothing I’d ever experienced. My trusty car choked and chugged its way through the 40 degree heat towards a perpetually hazy horizon. Despite the heat, I trundled on to Badwater Basin, which at 282 feet below sea level, is the lowest point in North America and one of the largest protected salt flats on the planet. A true sight to behold and a stark contrast from my next port of call, the luscious Sierra Nevada mountain range. I found it almost impossible to believe how the two were only separated by a mere few hours on the road.

After an overnight pit stop in Sequoia National Park, I jumped back in the car and headed north towards Yosemite. Considered the most famous of all national parks in the USA due to its world renowned hiking and biking routes, Yosemite is also a real joy to explore on four wheels. Keeping eyes peeled for black bears, giant redwoods, and the breath-taking scenery lining the roads whilst hopping in and out of the car is a great way to get off the beaten track. Spending a couple of days enjoying this magnificent wilderness was the perfect antidote to the bustle of Las Vegas and with miles of parkland still to discover, I am desperate to return. 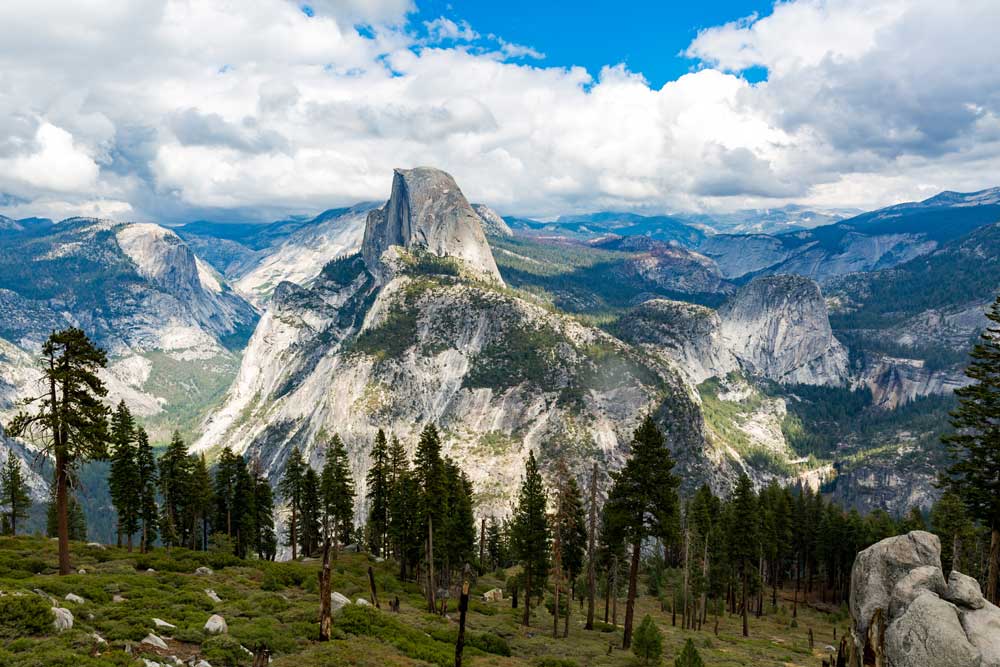 My next stop was Lake Tahoe, a place better known for its world class winter sports than as a haven for sun seekers. Yet, having shaken off the cobwebs of hibernation, by July it was a hive of activity for adventurers and sunbathers alike. From a leisurely cycle ride around the lake, to a rather less successful attempt at paddle boarding and a stint of sunbathing on the beaches of the northern shore, Tahoe has it all to fully unwind in nature. The view from the top of Monkey Rock looking over the lake is well worth the climb and a dip in the cool water at Hidden Beach upon your descent is a perfect reward after a hike in the blazing sun. 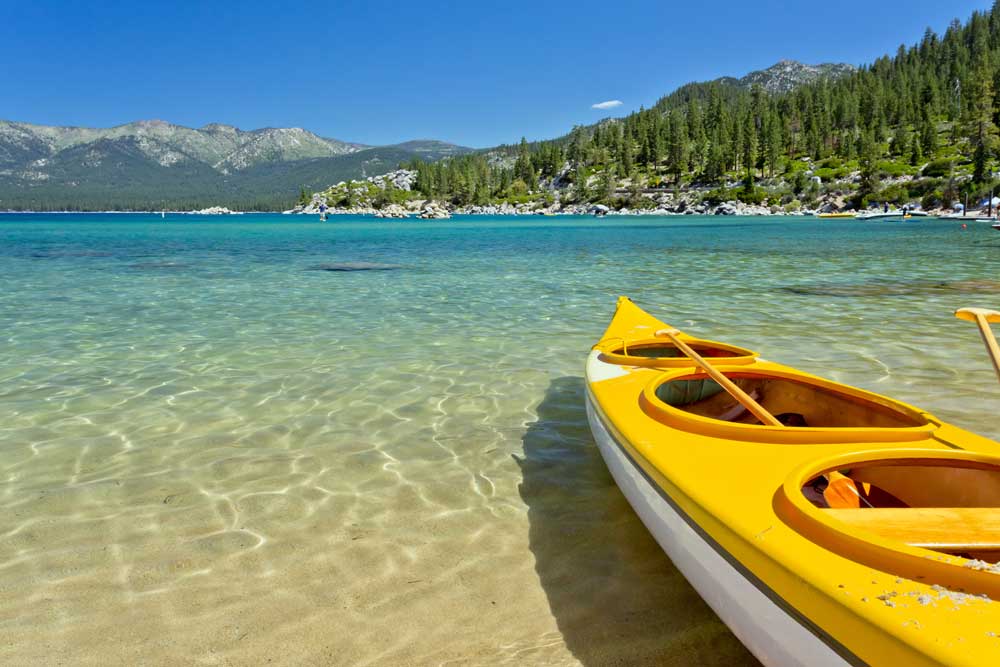 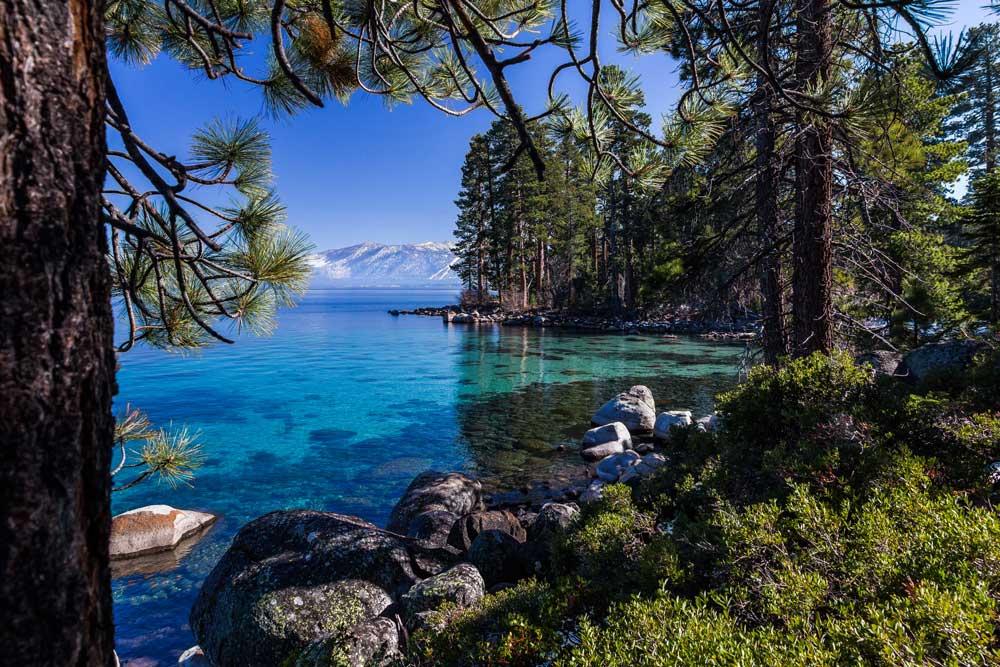 Find the secluded spots of Tahoe

Leaving behind the great outdoors, I headed southwest to round off my trip in my favourite Californian city, San Francisco. A few days there are well spent exploring the distinctive neighbourhoods of the city, indulging in a spot of shopping on Union Square, sampling a clam chowder at Fisherman’s Wharf, or mooching around the Presidio. For the first timer, a trip to see the resplendent sea lion colony at Pier 39, a hop across the water to the infamous Alcatraz or jumping on board the iconic cable car are all must-dos. Undoubtedly though, the Golden Gate Bridge is the jewel in San Francisco’s crown. Peeking out from the fog, the bridge is best seen from neighbouring Sausalito and the perfect way to complete any San Fran mini break. 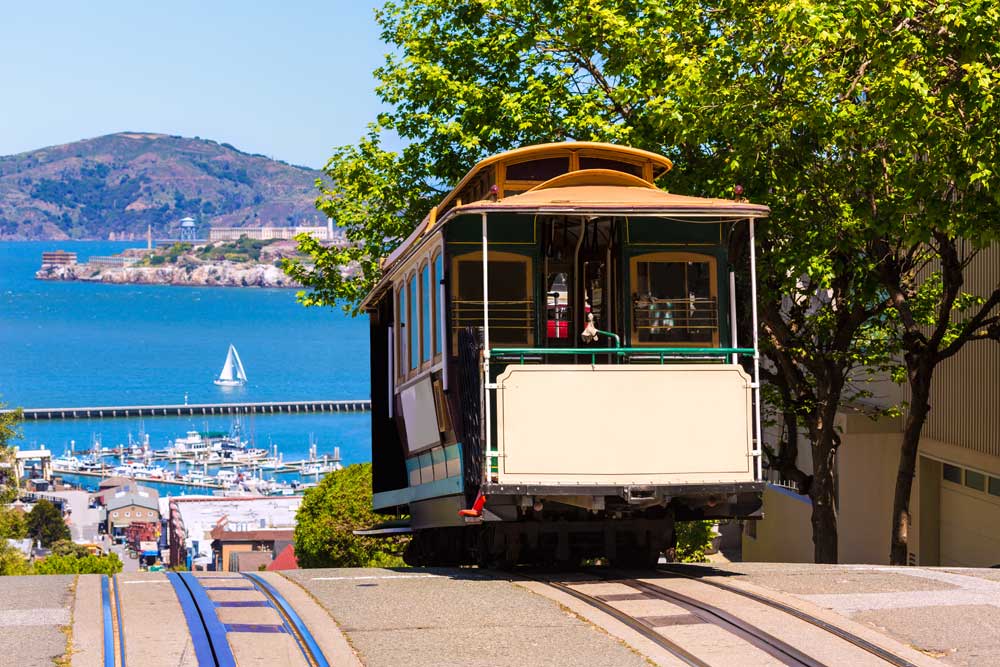 Hop on a cable car for the quintessential San Fran experience 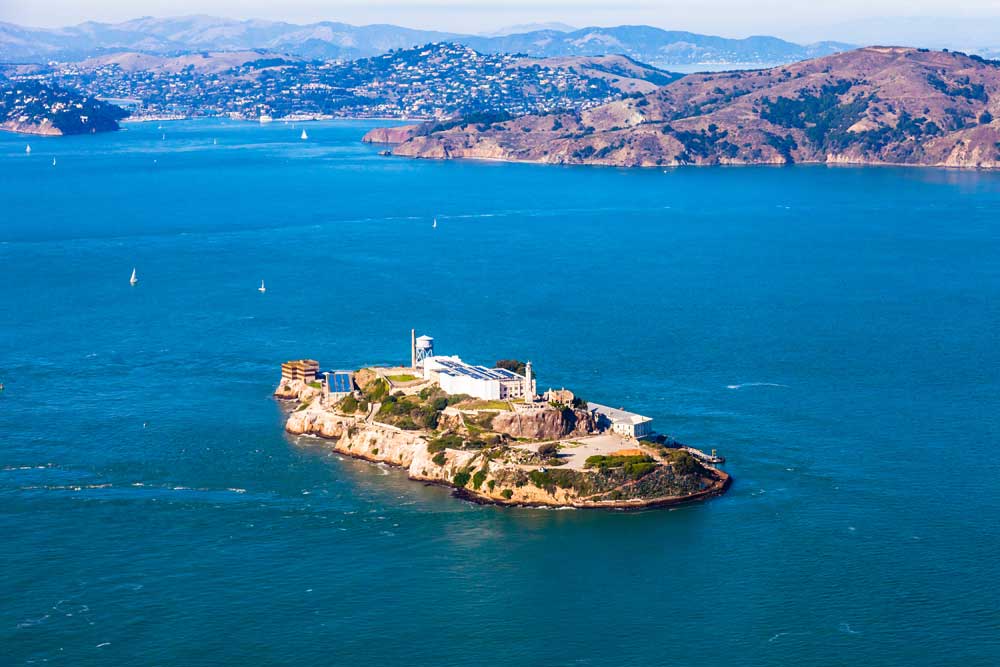 A summer spent on the road combining the splendour of North America’s natural wonder and the magic of two contrasting cities was a fantastic way to get under the skin of Nevada and California and a magnificent exhibition of what the west coast of America has to offer. With something for everyone to enjoy; nature enthusiasts, adventure aficionados and culture vultures will all be spoilt for choice on a trip to the glorious Golden State.