Anna, one of our Africa Consultants, recently returned from one of the best safaris she’s ever been on (and she’s been on a lot!), here’s why… When I first visited Sandibe Lodge, some years ago now, I thought it was a quirky camp with its copper-coloured mosquito nets, the separate decks in front of every ...

Anna, one of our Africa Consultants, recently returned from one of the best safaris she’s ever been on (and she’s been on a lot!), here’s why…

When I first visited Sandibe Lodge, some years ago now, I thought it was a quirky camp with its copper-coloured mosquito nets, the separate decks in front of every room, and the friendly little colony of fruit bats which had taken up residence in the main area.  A nice little camp but not, perhaps, one to write home about.

But over the past year Sandibe has undergone what can only be described as a spectacular transformation.  Gone is the large thatched main area, and in its place there is a masterpiece of 21st century architecture, a gracefully curved, intricately designed, beautifully engineered main area.  Resembling that rarest of African creatures, the pangolin, this huge, airy, open-sided wooden structure houses, on an upper level, the bar (created jigsaw-style, from over 700 separate strips of wood), and then a number of cosy seating areas including a private little library, and a dining area at the other end.  The whole massive structure is supported by towering arcs of pale wood, which lead out to the deck.  It is nothing short of breathtaking, and elicits excited squeals from all who enter (I know this for a fact; I was one of the squealers). 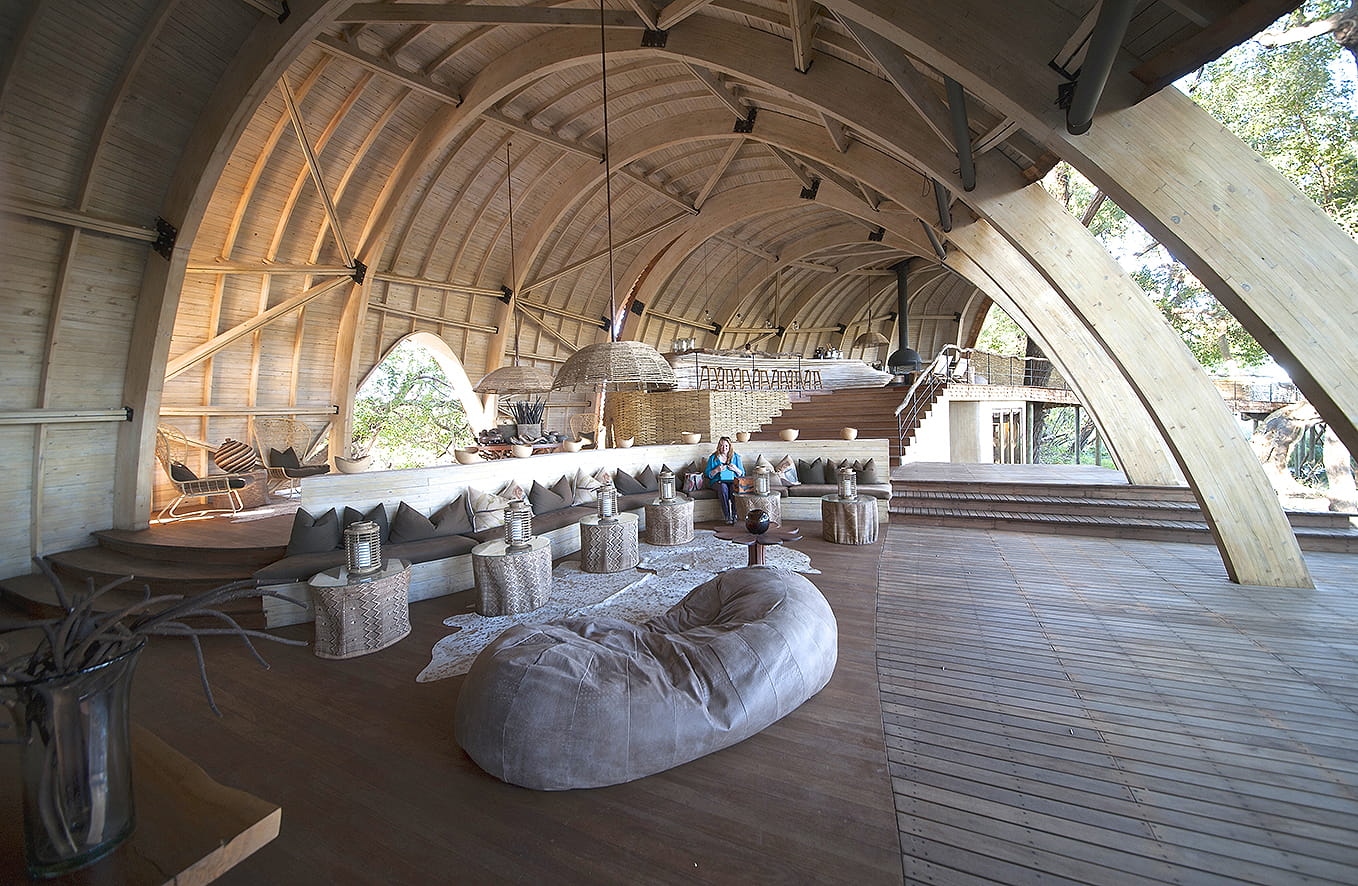 But the transformation does not end there.  Sandibe’s rooms are miniature versions of this enormous pangolin, and very thoughtfully designed inside.  A fireplace, the ubiquitous double sinks and a huge deck, complete with separate seating area and private plunge pool dominate the rooms, and the shower is a post-modern uber-urban concrete pod, into which you step and on looking up, see the trees above through the skylight.  It’s nothing short of a delight, it would not look out of place in a painfully stylish design magazine, and while it might feel a little incongruous in the middle of the African bush, it works.  Hats off to the design team for creating such a unusual camp and making it feel like home. 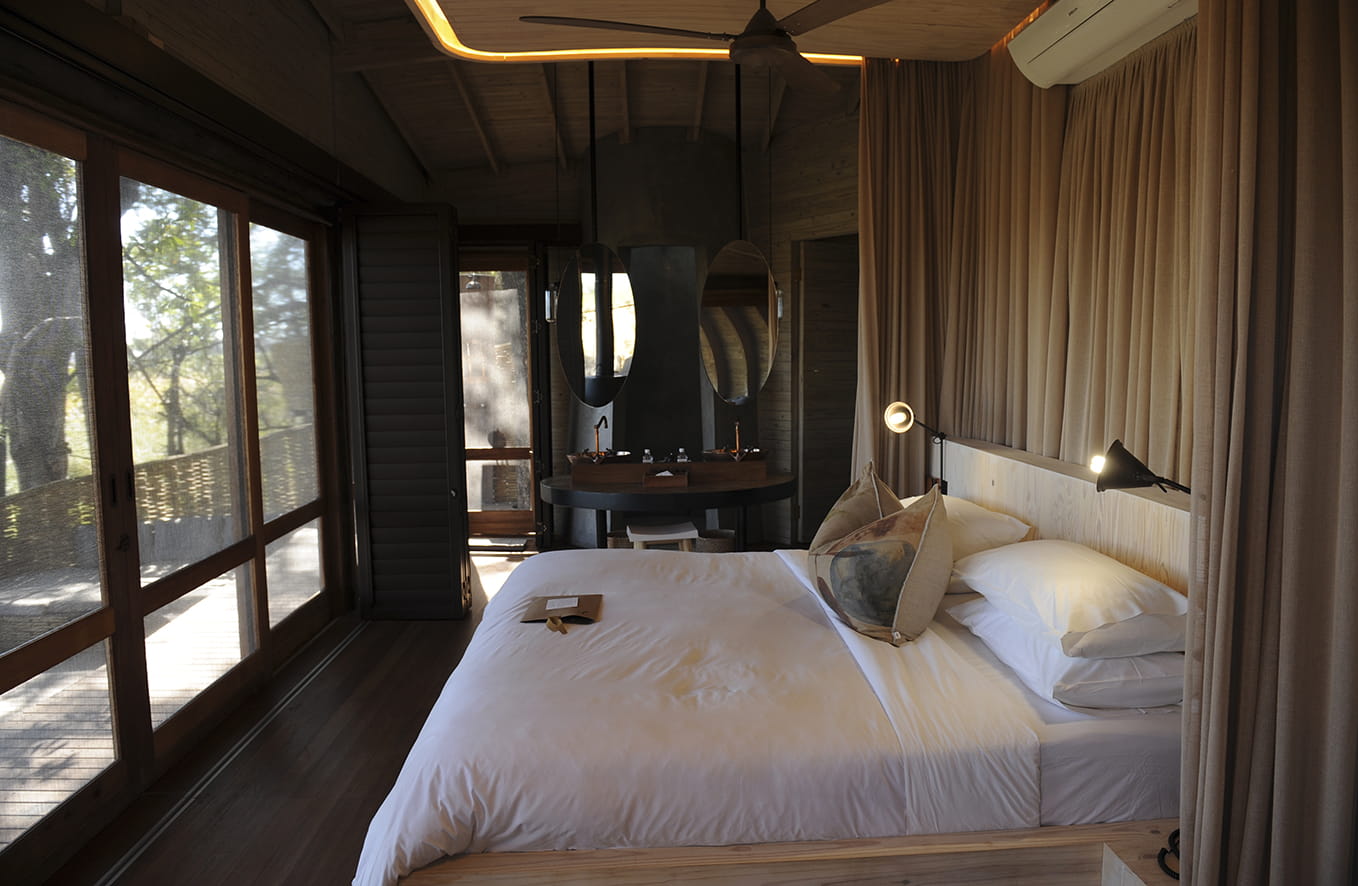 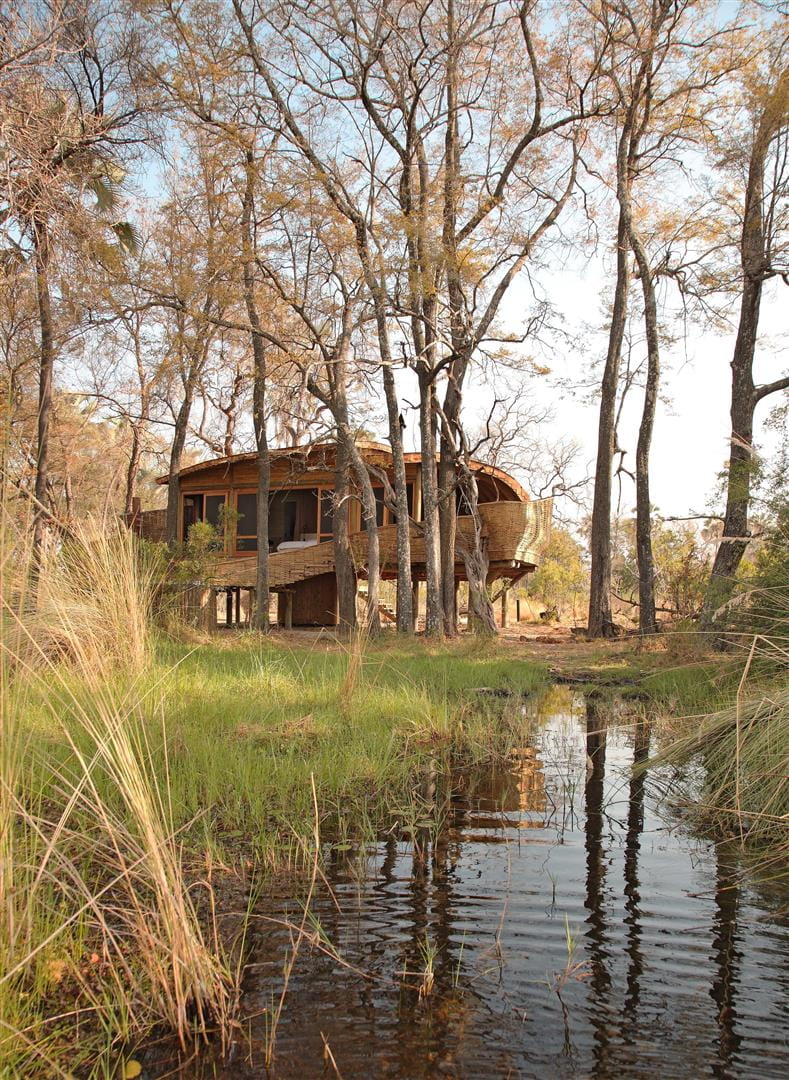 Dining area and bar at Sandibe

But the spectacular-ness of Sandibe continued beyond the architecture. As the sun rose, we had barely enjoyed our morning cuppa and bowl of mielie-pap porridge (try it – it’s delicious), before our enthusiastic guide Disho, and his eagle-eyed tracker City were beckoning us to the vehicles.  There was wildlife to be found, and Disho did not want us to miss a minute of it!  Thus began one of the best day’s wildlife sightings I had ever had (and this was my 44th trip back to Africa, so there was a lot to compare it to).

Our first sighting was the king of the beasts, a huge male lion with a wonderfully luxuriant dark mane, resting in the early morning sunshine and surveying his territory.  As we watched, he yawned, stretched langorously and, pausing only to scent-mark a nearby bush, wandered straight towards us.  When he was about ten feet away he looked right up into the vehicle, supremely unconcerned, and then detoured – only slightly, so the guests in the rear seats did squirm a little – walking directly behind the vehicle before padding off into the bush. 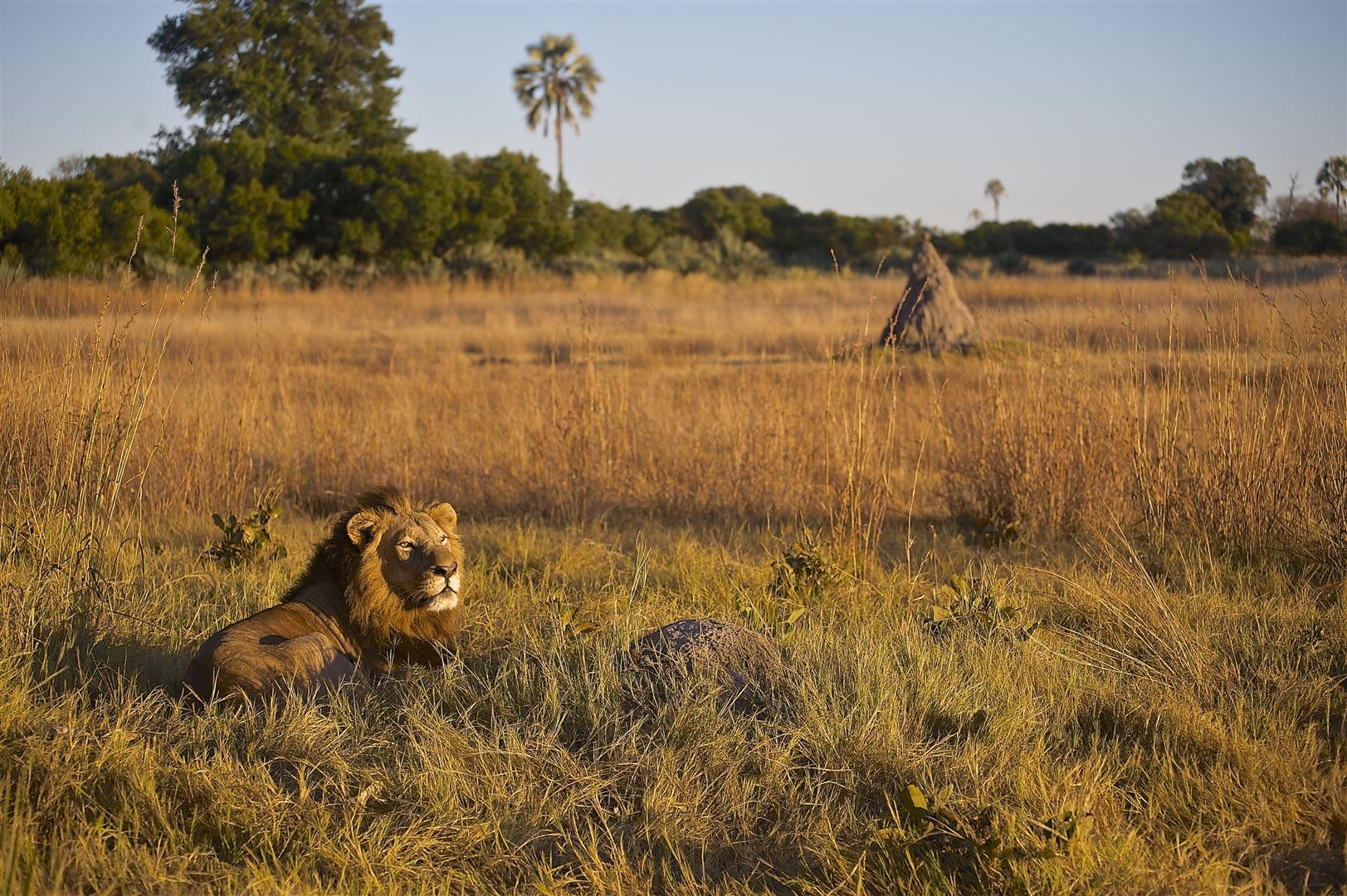 One of Sandibe's pride male lions

We moved on from our lion, and in response to my request, Disho took us to a place where elephant were known to be found.  This was a beautiful spot, a large flooded plain with rich green plants and we counted nearly eighty elephants in the area, all wading through the waters and enjoying their salad.  The herd included tiny calves, their trunks only just visible as they made their way through the deeper channels; and the scene was peaceful, and wonderful to watch as these enormous creatures moved gently through, eating their fill.  By this time, our stomachs were all rumbling too and we felt somewhat envious of the elephants chomping away; it was nearly midday after all!  So it came as a welcome surprise when Disho rounded a corner and there, set up under the shade of a towering Jackalberry tree, was a fully laden table, comfortable chairs and beanbags, and the Sandibe cooks all ready to cook us a delicious open-air breakfast!  This Bush Brunch is something that Sandibe likes to organize for all its guests, and it’s a roaring success; there’s nothing quite like bacon and eggs cooked outside, washed down with copious amounts of tea and accompanied by the scents and sounds of the African bush.  We ate our fill then relaxed on the beanbags, gazing across a lagoon where the elephants were entertaining themselves by splashing around.

Elephants on the plain

But we were here to see the game, and for our afternoon, Disho wanted to find us African painted wolf, also known as painted dog, or, rather unbecomingly, wild dog.  The guides had reported a heavily pregnant female and Disho was determined to find where she might den (give birth) so he could locate the pack, which never stray far when there is a new mother to support.  We set off with City scanning the dirt tracks for telltale paw prints, and after a surprisingly short time, we had located three of the pack, heading purposefully towards a small hillock covered in trees.  As they trotted onwards, they issued soft, entreating communication calls, and in response the rest of the pack came running from the clumps of wild sage.  We watched as the pack, now as one, headed back to the hillock and as Disho drove around it, the pregnant female, bulging with pups, emerged from one of the many aardvark holes which, we assumed, she had decided would be the perfect place to give birth and nurse her pups.  We watched for a while, fascinated by the greeting rituals of the pack, and then decided to leave the dogs in peace. 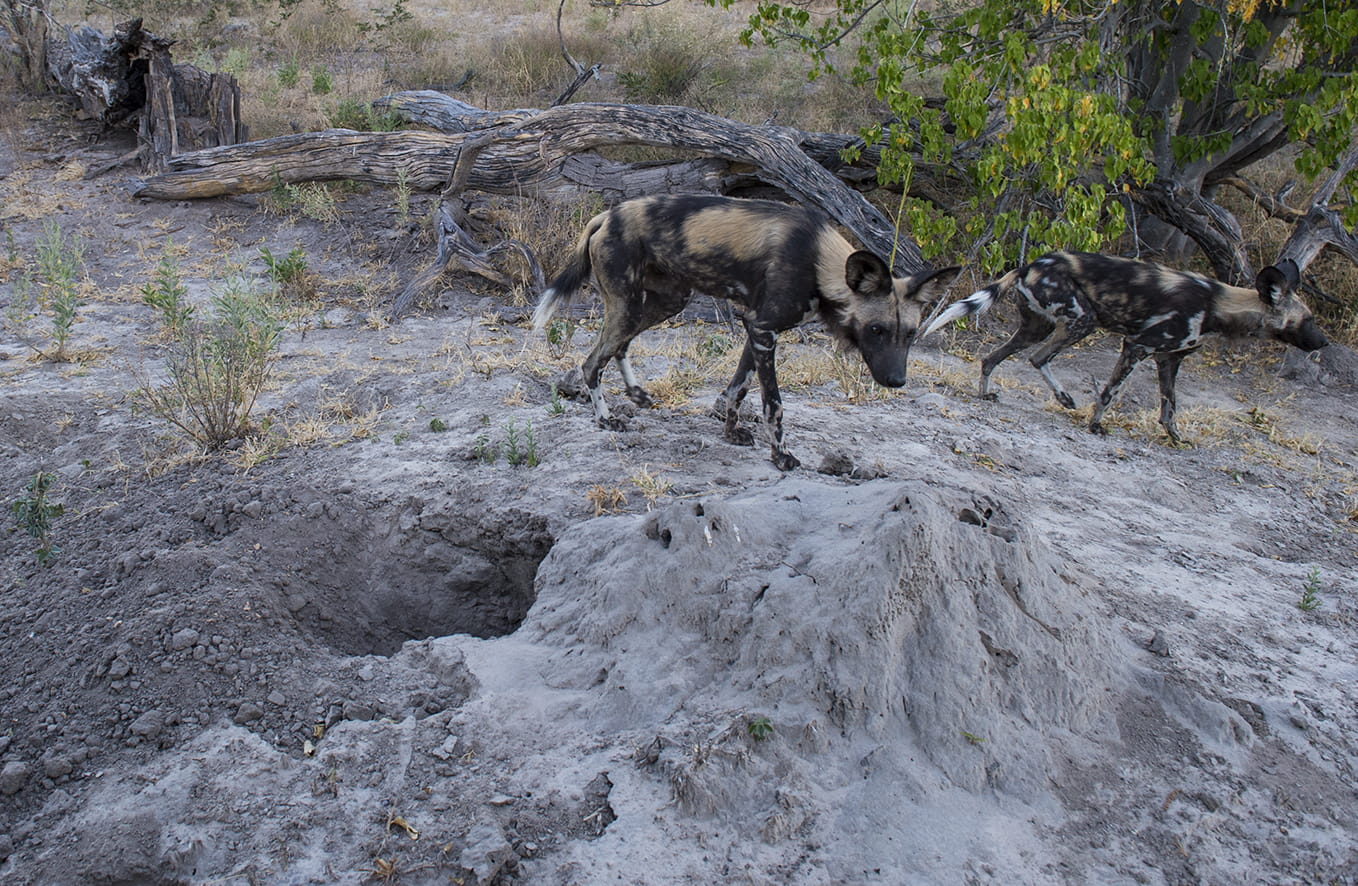 Wild dog on the hunt

As we retreated, however, the pack emerged from the bush and headed straight for a herd of zebra, trotting fast, their heads lowered, and clearly in hunting mode.  Our guide was slightly perplexed; it’s rare for a smaller pack such as this to hunt zebra as they can be a formidable prey – one solid kick from a zebra’s hoof could kill a dog, fragile as they are.  We soon found out what they were aiming for; as the zebra bunched up and galloped off, a lone wildebeest appeared from the centre of the herd.  The dogs surrounded the wildebeest, tails raised, and started to close in, nipping at its heels and forcing it to spin wildly to defend itself.  Just as we thought the game was up for the unfortunate creature, in the nick of time, the cavalry arrived in the form of the zebra herd, who thundered back into the fray again, scattering the dogs.  In the confusion the wildebeest joined up with the herd and they all escaped into the thicker bush.  It’s rare for the dogs to miss a kill, being some of the most efficient hunters in the bush, so we decided to retreat entirely to give them a chance to hunt again without our presence. 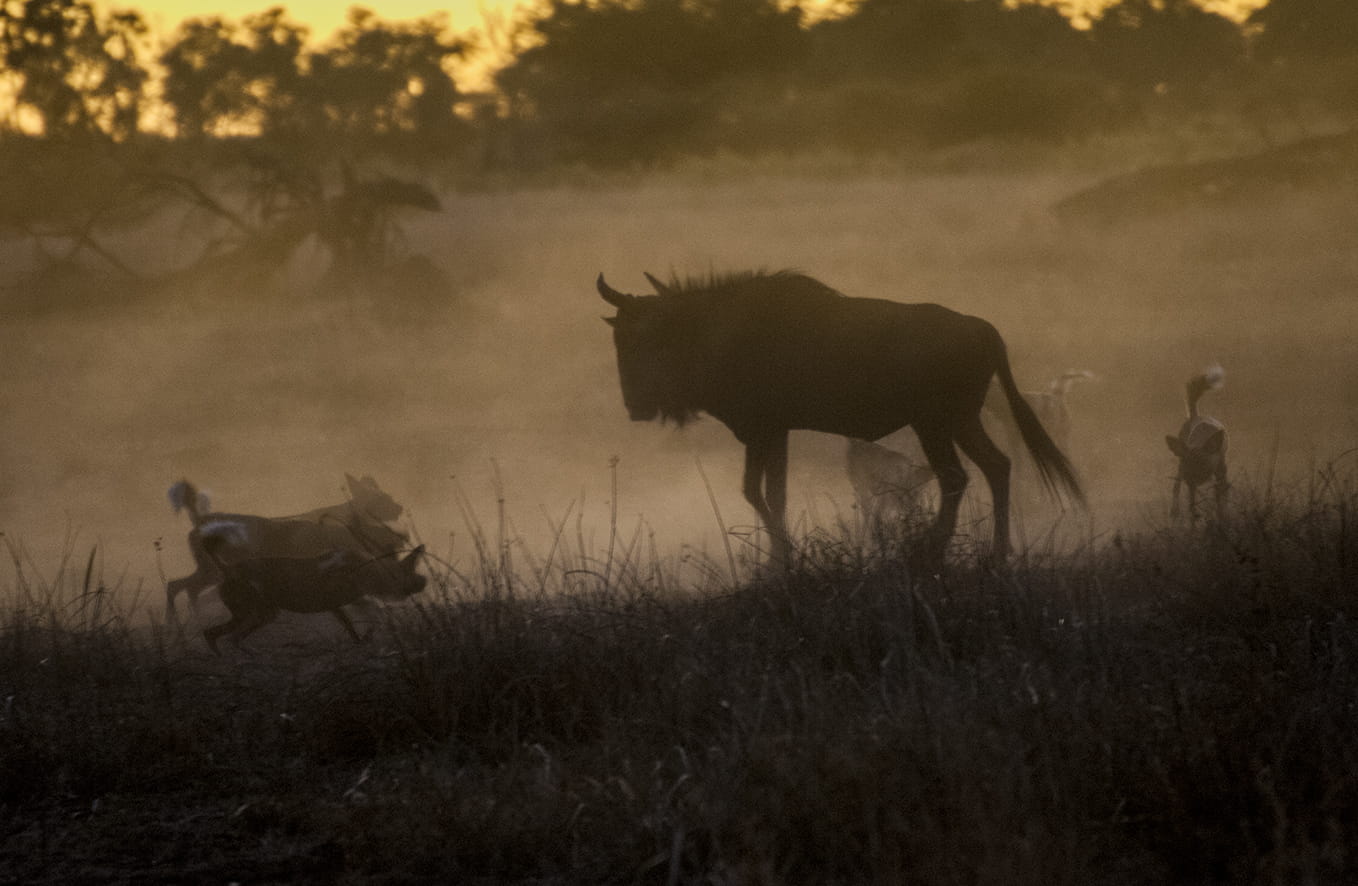 Clash between wildebeest and wild dog

En route back to camp we thought we had had the best of the day but were rewarded with further sightings; driving through a barren, sandy area Disho pointed out a number of vultures slouching in dead trees; by then our noses told us a carcass was in the area, so we followed the stench and found a male lion, busily chewing away at a half devoured buffalo carcass.  The buffalo – one of the old Dagga Boys, old males who are kicked out of the herd and either become solitary or form Grumpy Old Men coalitions – was upside down, its soft belly exposed and its ribs, now almost stripped of meat, arcing into the air.  The lion was ripping into the carcass, causing it to move around violently, and the scent was more than a little pungent, and we chose not to stay for long, snapping a few shots before heading off to enjoy sweeter, sage-tinged air. 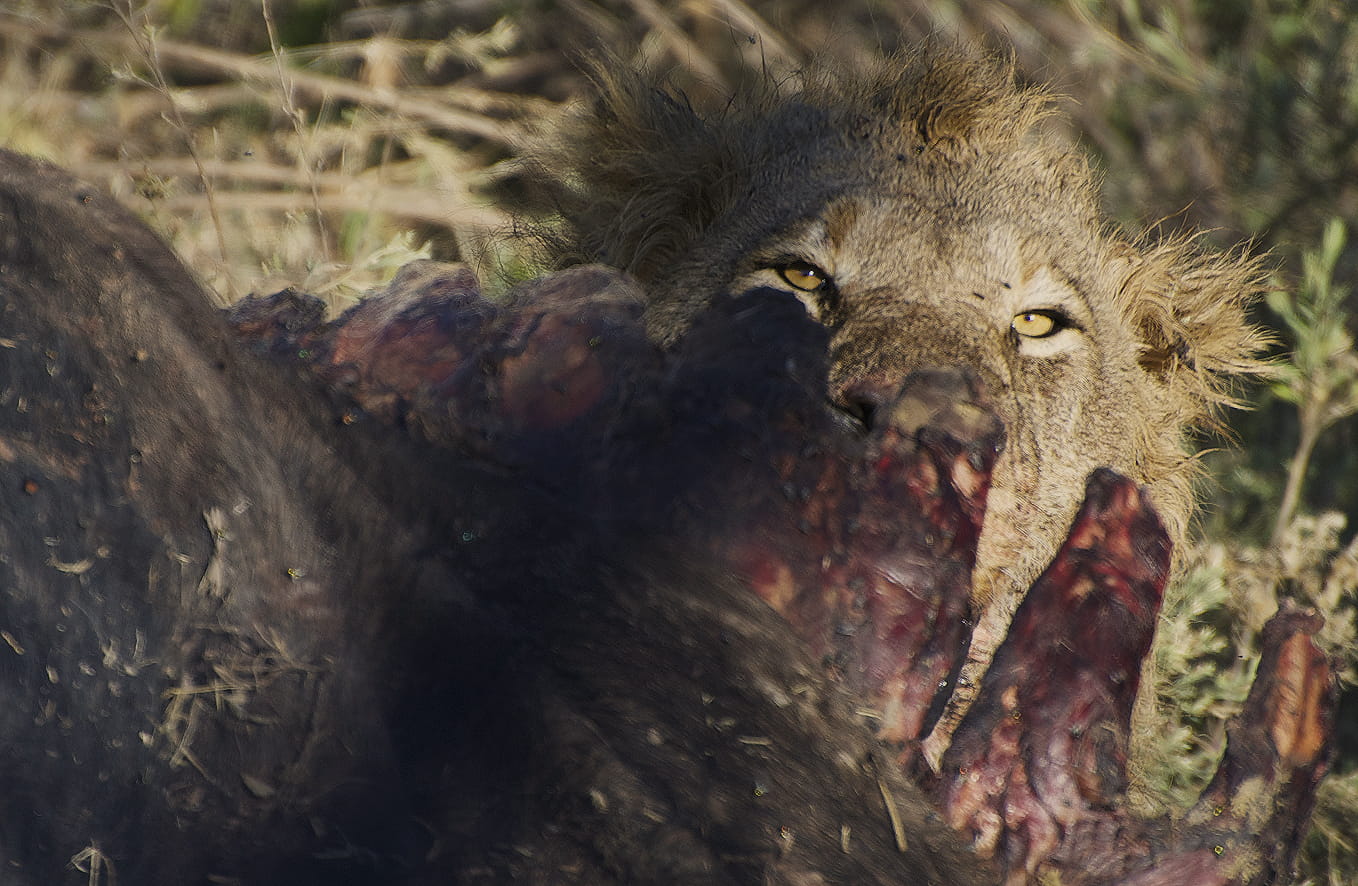 Our final treat was a wonderful sighting of a young female leopard, almost completely disguised against a fallen log, and spotted by City’s legendary heat-seeking vision.  As we watched she crawled forward, almost on her belly, towards a group of four unsuspecting impala about a hundred yards away.  Leopard hunt by stalking their prey and then a short charge over the last few feet; and we didn’t want to scare away the impala nor give the leopard an unfair advantage by distracting them, so after staying with her for a few more minutes we left her to her kill.  The following morning one of the guides reported a leopard kill up a tree in the area, so we assume that our little female was successful. 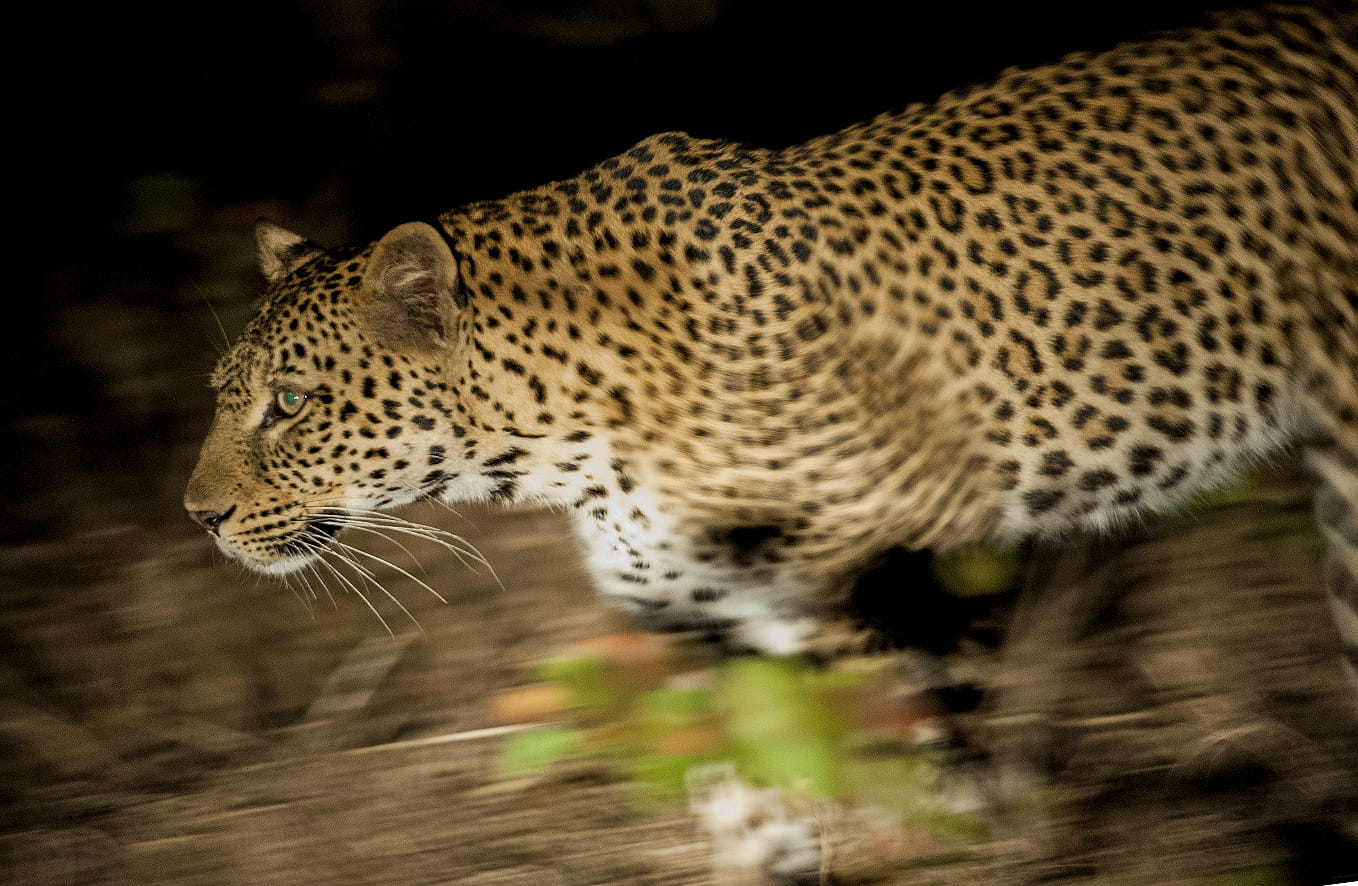 By this time, dusk had come and gone, so we returned to Sandibe camp by the light of the full moon, stopping briefly en-route for an impromptu star gazing lesson from Disho, to be welcomed by the friendly staff and rewarded for our extended time in the bush with hot water bottles and mugs of warming chocolate liberally laced with Amarula. If there’s a more perfect end to a more perfect day than that, I can’t think of it!

For more information on Sandibe Safari Lodge call one of our Africa Consultants on 0203 603 3555 or visit scottdunn.com

This entry was posted in Africa, Wildlife, and tagged Botswana, Safari, Southern Africa,