Planes, Camels and Automobiles: The Many Modes of Transportation in Kenya

Oh, the places that you will go in Kenya, and getting there is a journey in itself. Kenya is an ideal destination for those who like the option of having a change of pace from the traditional game drives. The Northern region of Kenya, primarily Laikipia and Samburu, offer alternative activities that get you off four wheels and on to say,  four legs? While the Southern region offer you the chance to get airborne. Here’s a list of just some of the Africa Travel Expert, Kelly’s favourite modes of transportation that you can take through Kenya.

Feel like Lawrence in Arabia, only slightly more awkward, as you travel through the dry, sun-scorched terrain of Northern Kenya, on the hump of a camel. Led by beautifully decorated Samburu warriors, adorned in bright coloured cloth, swaddled around their waist like Scottish kilts. Their bodies covered in beaded necklaces, bracelets and anklets that shimmer against the sun as they lead you to discover unusual species like the Northern Special Five – the Beisa oryxa, Grevy’s zebra, Somali ostrich, gerenuk antelope and reticulated giraffe. Getting close to animals on the back of a camel is a whole other experience. It’s incredibly peaceful and tranquil as there are no noises of motors,  just the sounds of the variegated bird life in the reserve. 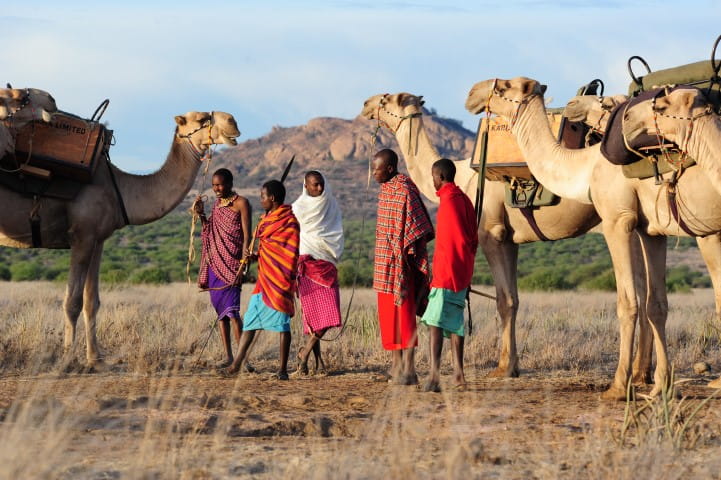 Guides with their camels 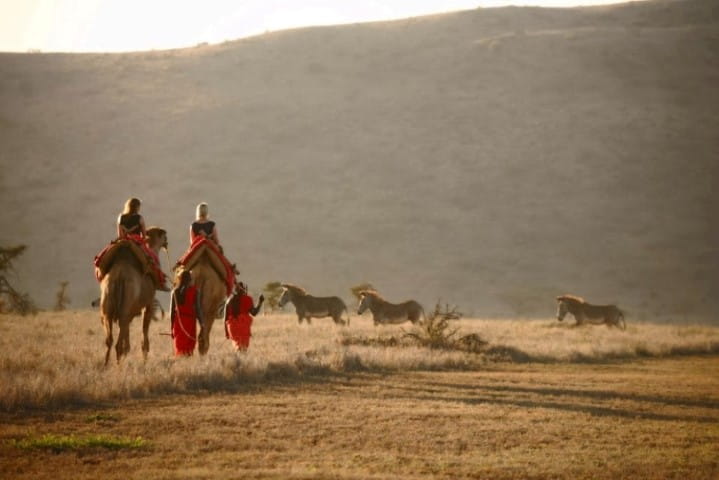 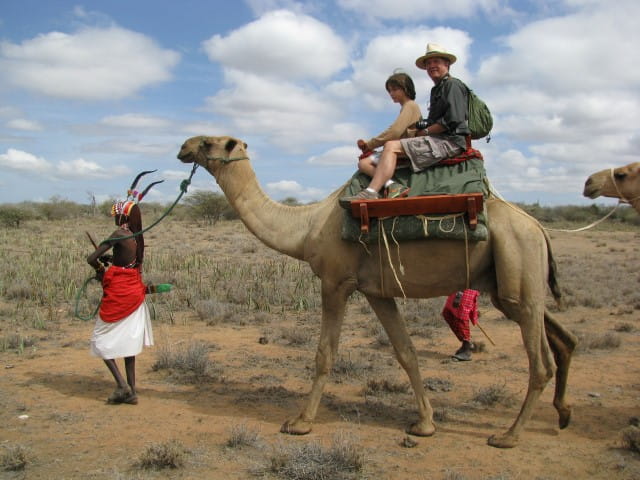 Get a bird’s eye-view of the changing landscape below and set off in a helicopter, allowing you to hover over the rolling hills and herds of plains animals like Grevy’s zebra. Explore the surrounding areas that would be too hard to get to by car or plane such as Lake Turkana, an archaeological and geological UNESCO site of wonder. Activities here are endless and range from fishing day trips to overnight fly camping. Marvel at the scenery including the sea of pink flamingos that gather in the wold’s largest desert lake. 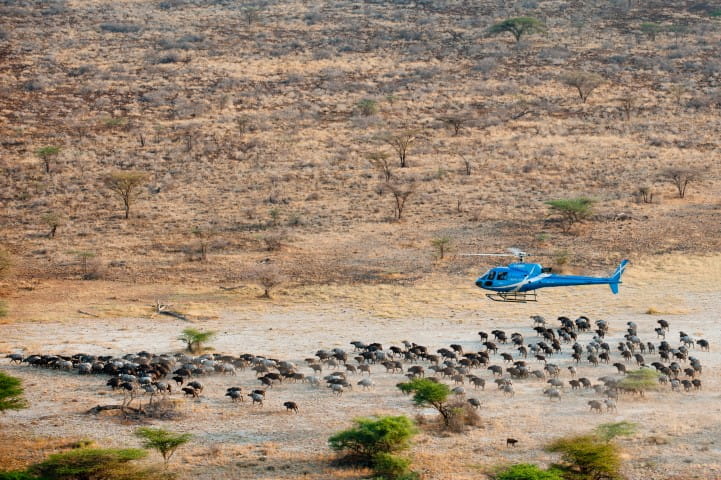 Watching buffalo herds from a helicopter 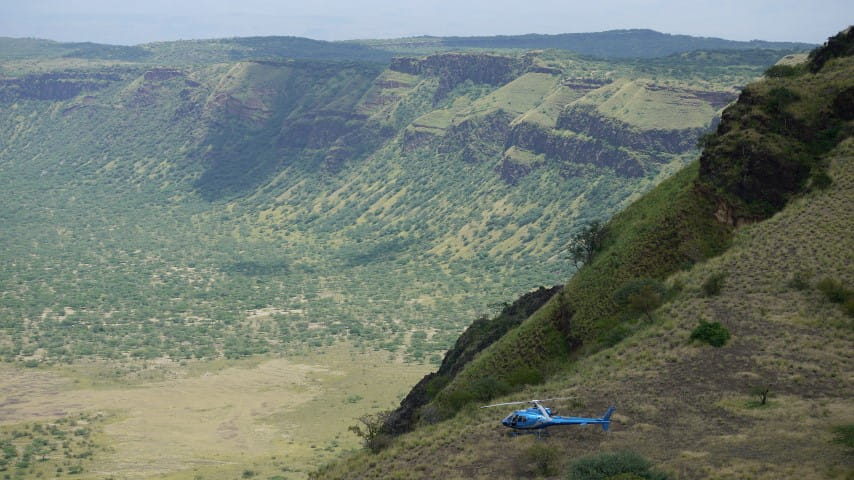 There’s nothing like riding through the Maasai Mara on horseback and getting up close and personal to herds of wildebeest, impala and even close to big game like lions. You may never want to do a game drive in a vehicle again! Not just for the advance equestrian but also for the pure beginner, you’ll be matched up with a horse that meets your riding requirements and will only go on a trail ride that meets your ability. Gallop next to giraffes, feel the wind rush through your hair and the adrenaline pumping through your veins. Or have a leisurely stroll through the savannah and open grass plains, soaking up the expansive scenery- there is something for everyone! 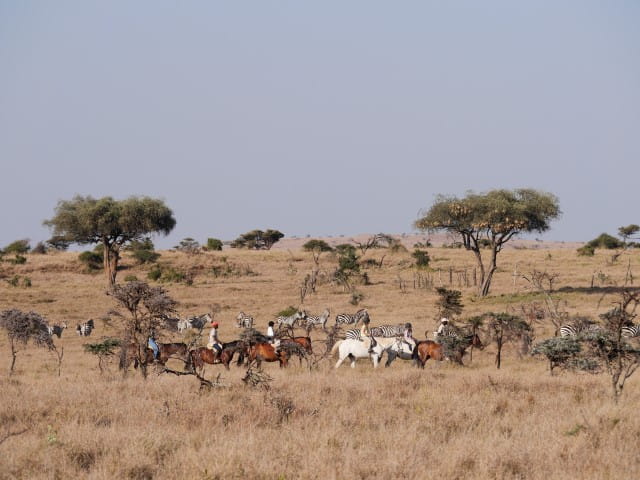 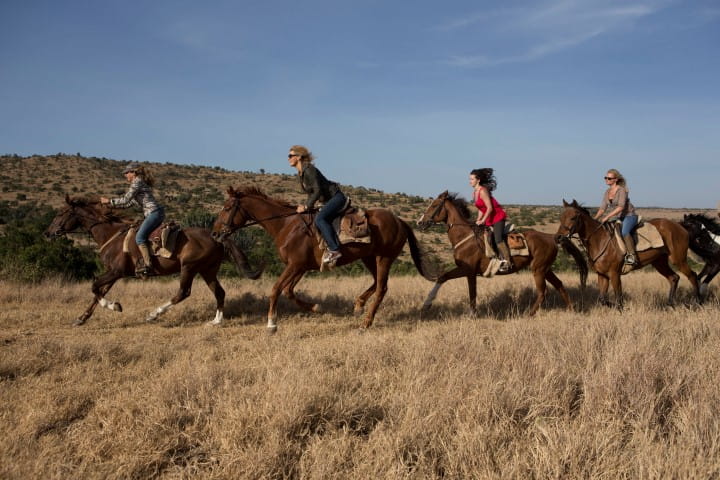 Riding across the Mara

In the heat of the day, head to the water to cool off. One of the only places in Kenya you can kayak is Ekorian’s Mugie Camp, where you can spend your afternoon on the water admiring elephants coming to the water for their afternoon drink and a swim. This is an incredible photo opportunity. Lunch on the island in the middle of the dam is a must and you can even spend your whole day and night there fishing and sleeping under the stars. 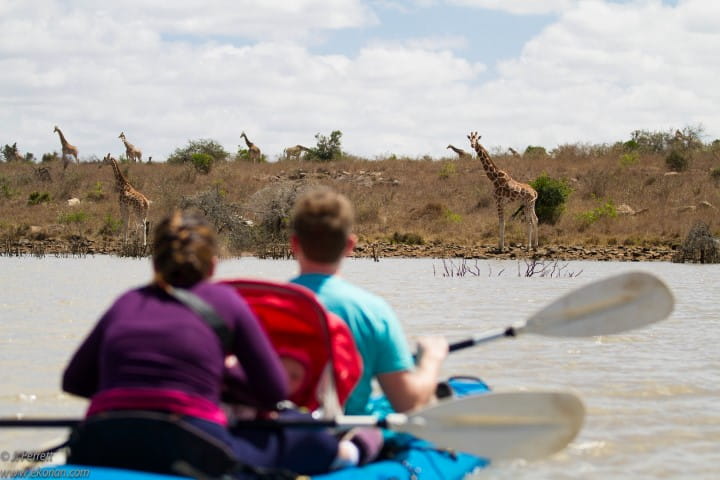 Getting an up close view of giraffe on a kayak safari 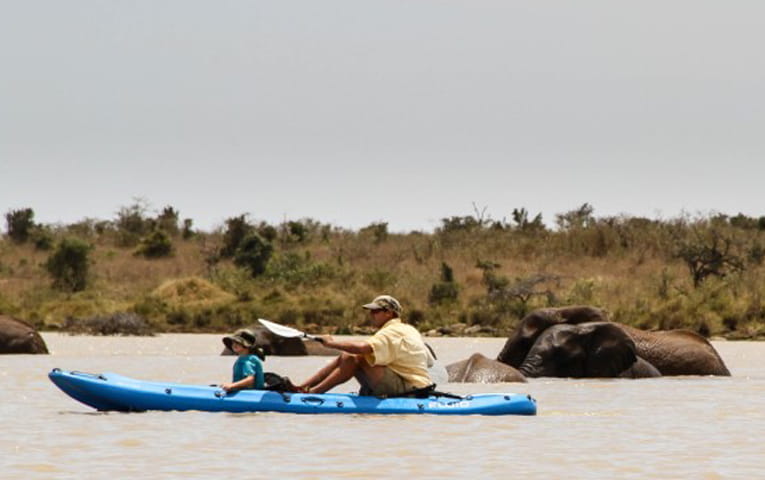 The sheer thrill of stepping out in the bush with nothing but your able body and the security of a guide and a tracker is truly a way to “feel” Africa. Led by experienced guides, you will wander through the bush and notice the things you miss in a vehicle. Learn about the bush, the animal prints, who makes them and even identify feces of animals as well as their burrows. Crouch down and gaze at herds of buffalo from afar as you go unnoticed by the animals in their habitat. 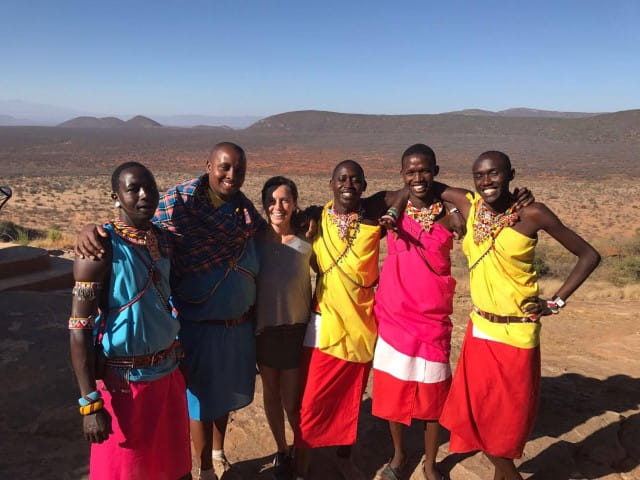 Kelly with her guides on a walking safari 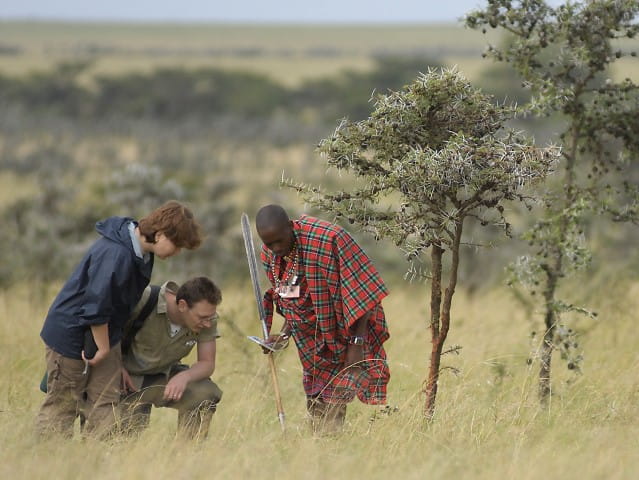 Identifying the smaller parts of safari in the bush

Get the Out of Africa experience by heading up in the air to appreciate the diverse wilderness from above. Flying low there is so much to see, even going from safari camp to safari camp. Spot game from the air and see how the fast the landscapes change below you. You can even have unique experiences like a jaw dropping flight in a Waco bi-plane around the peaks of Mt. Kenya. 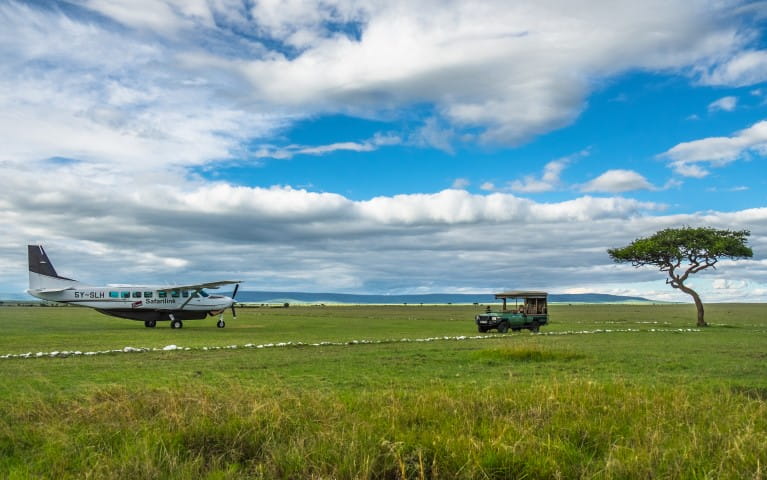 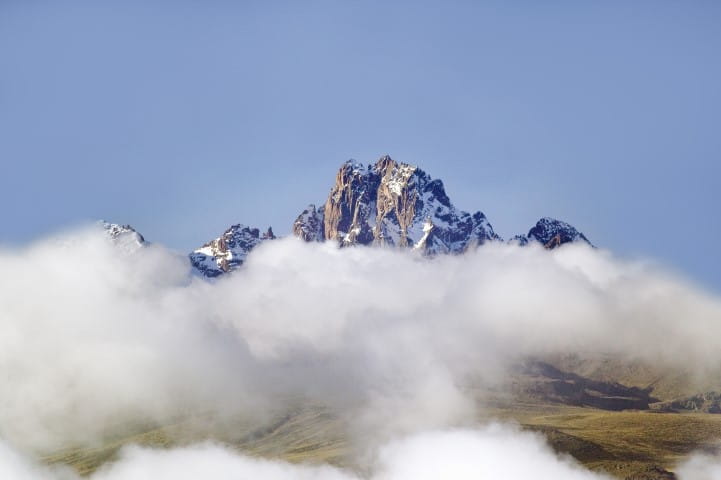 Views of Mount Kenya from the skies

Get out of your seat and head for the roof of the 4×4 you’ve been riding around in. Many vehicles in Kenya are equipped to let their passengers take in the game viewing right on the roof of the car. Some are more adventurous, and require a sturdy grip, while others have bench chairs attached to the roof, so you can get the scouter’s view at your leisure. This puts you in prime position to scour the land and point out game. It’s a fun way to get a cool breeze on your face and enjoy a couple laughs as you bounce along on top of the roof of the car. Also, exceptional for star viewing during the drives back to the camp at night. 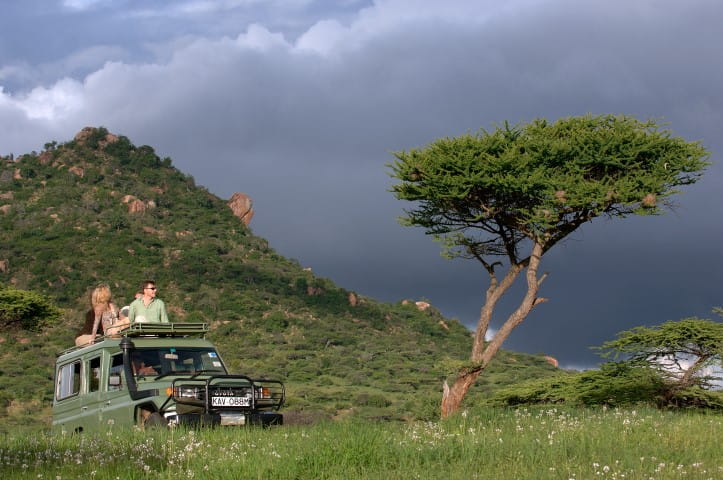 Amazing views from your vehicle roof 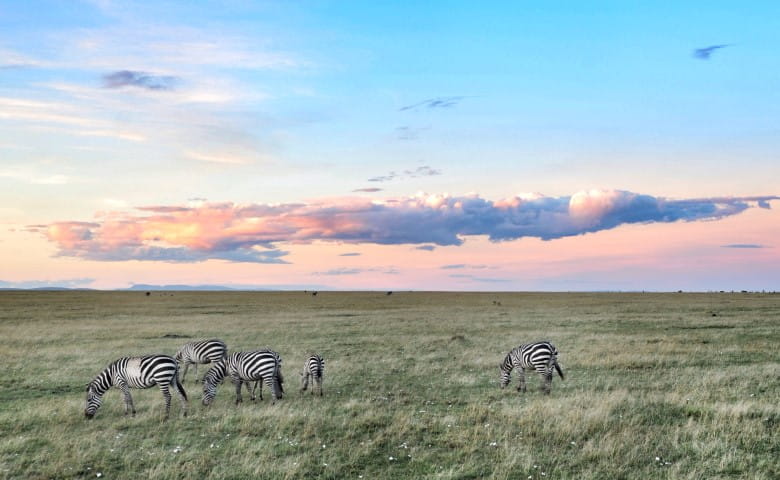 Zebras in the bush

Float along the open plains of the Maasia Mara, absorbing in Africa at first dawn’s light is about as magical and romantic as it can get. You’ll have a 360-degree view of the vast open plains, gentle rolling hills and meandering rivers that will open up before you. As the sun begins to rise so do the animals from their slumber or the predators returning home from a hunt. Take in the ecosystem of the Mara and the flora and fauna in complete silence except for the occasional spouts of heat from the burners. Truly a honeymoon or anniversary must do as you can end your once in a lifetime hot air balloon adventure with a champagne breakfast in the bush. 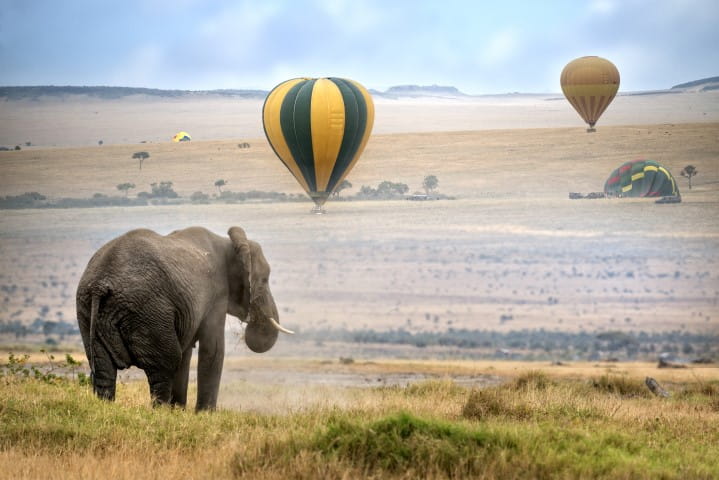 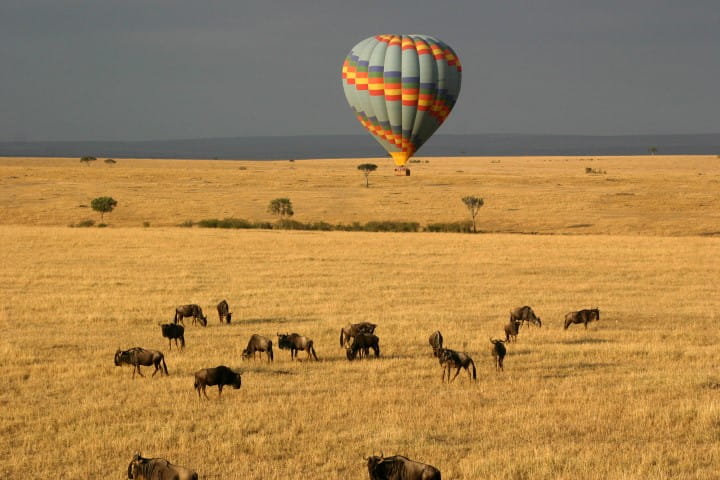