Revitalising views, captivating culture and crisp mountain air, this ten-day tour of Norway is the perfect concoction for travelers who savour exclusive experiences with a touch of relaxation. We’ve hand-picked the very best hotels and lodges to make sure every stop on the trip promises unique flair complemented by seamless service.

Best time to visit Good time to visit Average time to visit
The best time to travel in Norway is during the summer months. May is a beautiful time to go with the snow capped mountains, raging waterfalls and blossom on the trees. For those that would like to have a bit of a calmer trip outside the peak season, September is also great. As the leaves are changing and the weather is still warm, it makes for a fantastic time of year to visit.

The Flaam Railway is open all year round; voted one of the most beautiful train journeys in the world.

Welcome to the glistening city of Oslo, undoubtedly one of Europe’s most pleasurable capitals. Surrounded by the undulating Oslofjord and the emerald prominences of Norway, you will feel a sense of calm in this compact, cultured and gratifying metropolis. Upon arrival in Oslo, you’ll be transferred to the opulent Amerikalinjen, your home for the next two nights. Formerly the headquarters of the Norwegian American Line, the hotel’s building dates back to 1919 and maintains its original façade through an eloquent mix of contemporary decor and historic memorabilia.

Known for its central location and supreme levels of service, we’ll curate an exemplary day of exploration so that you leave no Oslo stone unturned. Delve into the heart of the city’s culture with your private guide and uncover the historical legacy of its remarkable buildings. Roam around one of the city’s captivating museums, expose its new-fangled art scene in one of the copious commercial galleries or simply marvel at monumental buildings and the fine work of its starchitects. After a riveting day of exploring the city, head back to Amerikalinjen and unwind with an enticing book in the distinctive library, which has been purposefully designed to replicate the common areas onboard a ship. Freshen up for dinner and indulge on fine cuisine in the hotel’s customary restaurant and conclude your evening with refreshing drinks in the basement’s jazz club where you can dance or listen to the soulful live music until your heart is content. 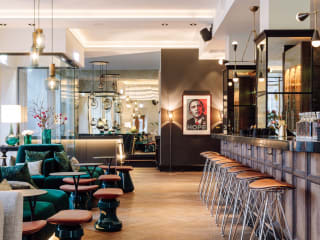 Leaving the bustle of Oslo behind you, glide into the staggering beauty of Aurland for the next leg of your journey. Prepare to be stunned as you embark on the famous Flåmsbana railway, an unforgettable transfer offering a rare window into the extraordinary world of nature at its purest. Life-affirming scenery awaits in the charming village of Aurland. Surrounded by crystal blue fjords, emerald mountains and the famous ‘snow road’, Aurland is one of Norways best-kept secrets and offers a plethora of outdoor activities for you to jump into.

Step off the tourist trail and feel a sense of home as you arrive at the winsome 29/2 Aurland, an authentic boutique hotel that is beautifully decorated, family run and set in the heart of the great outdoors. The standalone house with five bedrooms is beyond homely with a log burning stove, cosy wooden throws, sublime bathrooms and deep armchairs. The owners are always on close call and provide a seamless, hospitable service throughout. You’ll have plenty of opportunity to explore the surrounding area during your time here. Lace up and begin your stay in style with a hike to the thundering Turlidfossen Waterfall. Soak up the phenomenal views as you get to know your knowledgeable guide and learn about the local environs. Take to the water and traverse the pristine fjords by rowing boat, marvel at the dramatic mountain peaks and look out for vibrant fishing huts peppered along the shoreline before stopping for a serene picnic lunch. Round off your stay with one last picturesque hike guided by your host to Hovdungo pasture farm. Engage in compelling stories told by the resident farmers, learn about the local food production and be rewarded with delicious home cooked soup, local cheese and sumptuous jams before heading back to 29/2 Aurland by car. After an unmatchable three days of exploration, unwind in the luxurious outdoor jacuzzi with a glass of wine as you observe the sun set against the jaw-dropping backdrop of the magical Nordic mountains. Accommodation: 29/2 Aurland ( 3 nights ) 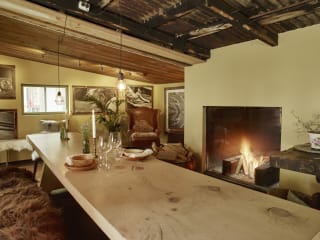 Time to drive two hours south-west through the seven hills and seven fjords to the beguiling city of Bergen. Staying at the opulent ‘Opus XVI’, you will be perfectly located in the center of town and just a few steps from the historic UNESCO World Heritage listed Bryggen. Formerly built as one of the largest banks in Norway, you will get a real taste of the 1876 Nordic flair as the hotel proudly displays nods to the great heritage, including original marble tiles and imposing vault doors. The ambience is relaxed, informal and cosy, yet the level of service and luxury are of the highest standards.

Stroll into the Old Town and traverse all that Bergen has to offer on a private tour with one of our expert local guides. Roam the colorful waterfront lined with brightly painted shopfronts, lose yourself in the narrow alleyways jumbled with clapperboard houses that creep up the hillsides and quench your thirst in one of the many rustic cafes. Embrace quirky architecture as you continue your tour past the famous Hakanhallen fish market, St. Mary’s Church and the Bohemian area of Ole Bulls Square before hopping on a gentle funicular ride to the top of Mount Floyen for a visit to the spellbinding Troldhaugen. 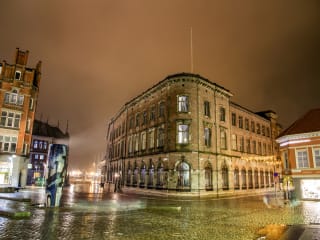 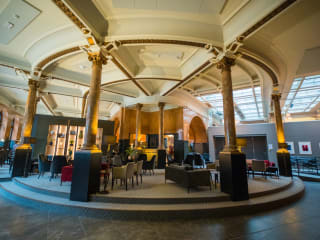 Leaving the fun of Bergen behind, it’s time to really escape from it all at Storfjord. Situated in the North, you’ll catch a short flight to Alesund where you’ll meet your driver and take a short transfer to your hotel. Nestled above the majestic fjord and boasting impressive views, Storfjord combines stylish welcoming comforts within its traditional log cabin exterior and tasteful contemporary interior. Sheepskins, tweeds, rough wood, and knick-knacks peppered upon rustic furnishings create a pleasing ambience and soothing sense of home.

The surrounding area of this idyllic sanctuary is an unspoiled wilderness waiting for you to expose. Delve into the rugged alpine peaks with your expert guide and hike through the heart of the Sunnmøre Alps, soaking up the staggering hues of sapphire waters and emerald valleys. Climb aboard a private boat and traverse tumbling waterfalls and historical mountain farms to one of Norway’s most awe-inspiring fjords, Geirangerfjord. On route you will have the opportunity to stop in the fjord village Geiranger. Roam the charismatic boutiques, learn about the Norwegian Fjords in the museum or simply kick back with a refreshing cup of tea and digest the scenic nature that surrounds you. After an invigorating day of hiking, repose in the snug sitting room by the log fire and indulge in a delicious tea-time treat, before freshening up for dinner. Tantalise your tastebuds in the open plan kitchen as you observe the master chef cook up a storm. Based on local ingredients and traditional Scandinavian dishes with a twist, expect gourmet cuisine regardless of the rustic milieu. Accommodation: Storfjord Hotel ( 3 nights ) 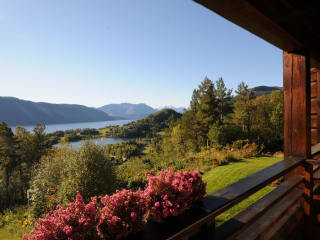 Centrally located in a vibrant and artistic neighborhood, Amerikalinjen is in the perfect location to explore Oslo. This luxury hotel is set in a landmark building with a contemporary style and fantastic bars and restaurants.

29/2 Aurland is a real find, located perfectly near Flam, the fjord and close to the stunning Snow Road. This beautifully decorated, family-run home away from home offers a warm and authentic Norwegian welcome.

Opus XVI is a luxury hotel in the center of Bergen, just steps from historic Bryggen. Whilst retaining original features from its former life as Bergen's largest bank, the furnishings have a stylish Scandinavian twist, perfect for couples and families.

Storfjord Hotel, with its panoramic views to the fjord and warm welcome is one of a kind in Norway. Its beautiful décor with sheepskins, tweeds and rough wood, and antiques and knickknacks dotted about give this boutique hotel a charming ambience.

Best time to visit Good time to visit Average time to visit
The best time to travel in Norway is during the summer months. May is a beautiful time to go with the snow capped mountains, raging waterfalls and blossom on the trees. For those that would like to have a bit of a calmer trip outside the peak season, September is also great. As the leaves are changing and the weather is still warm, it makes for a fantastic time of year to visit.

The Flaam Railway is open all year round; voted one of the most beautiful train journeys in the world. 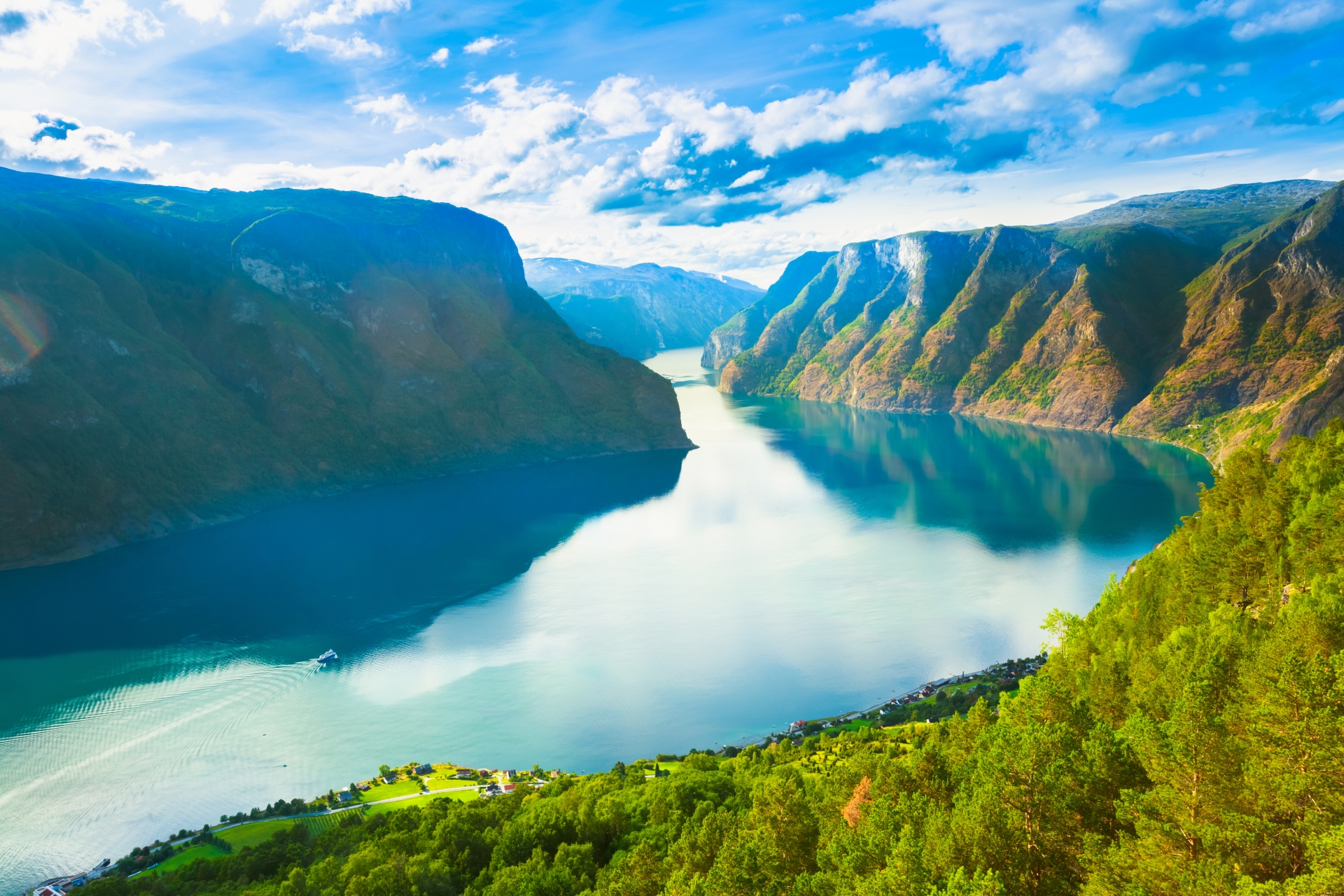