More commonly known as the bullet train, Japan’s Shinkansen rail network first wowed the world at the Tokyo Olympics in 1964, pioneering the way for high-speed travel.

Whether you want to tour the country by rail, head off for a weekend in the mountains or simply experience the hustle and bustle of Shinjuku Station (which is believed to host a staggering three million people every day), the bullet train forms a vital part of any Japan itinerary. With a complex network of lines linking the very north of the country to the very south, the bullet train has become the reliable backbone of Japan, joining the rural to the cosmopolitan in the blink of an eye.

While train travel has a reputation for maintaining a leisurely pace, the bullet train offers routes across Japan with blistering speed and soundless stealth. Snaking its way across Honshu, the largest island in the Japanese archipelago, the bullet train rattles up and down the country at a staggering speed of up to 200 miles per hour. As synonymous with the Land of the Rising Sun as Mount Fuji, sumo, or sushi, the bullet train is arguably the only way to travel in Japan and attracts visitors from far and wide.

Japan is known as a country of binaries, and the bullet train is a fantastic way to see its contrasts. Starting in Tokyo’s Shinjuku station, which is believed to be the busiest in the world, the spectacle begins before you’ve even set off. Sitting at one of the station’s ramen stands and soaking up the buzz of the station guarantees an incredible snapshot into daily life in Japan. From Tokyo, head west across the Japanese Alps to Kanazawa, only a two-hour train ride away yet a journey back thousands of years. From here, you can either jump on the train to Hiroshima for a harrowing insight into Japan’s history or make a beeline straight to Kyoto, the cultural heartland of the country.

How Easy Is It To Use the Bullet Train?

As one of the most dependable rail services in the world, the bullet train is easy and efficient to use.

You needn’t worry about missed trains, lost luggage, or finding your platform. Navigating your way around the stations couldn’t be easier with the signs clearly labeled in English and platforms directly noted on your train ticket. Leave the logistics to us and sit back, relax and watch the blur of the outside world whoosh past your window.

Even in standard class, cars are roomy, clean, and quite comfortable! However, for a premium experience, opt for an upgrade to a Green Car, which affords you a larger seat that can recline up to 40°, as well as an integrated radio set and a travel magazine. 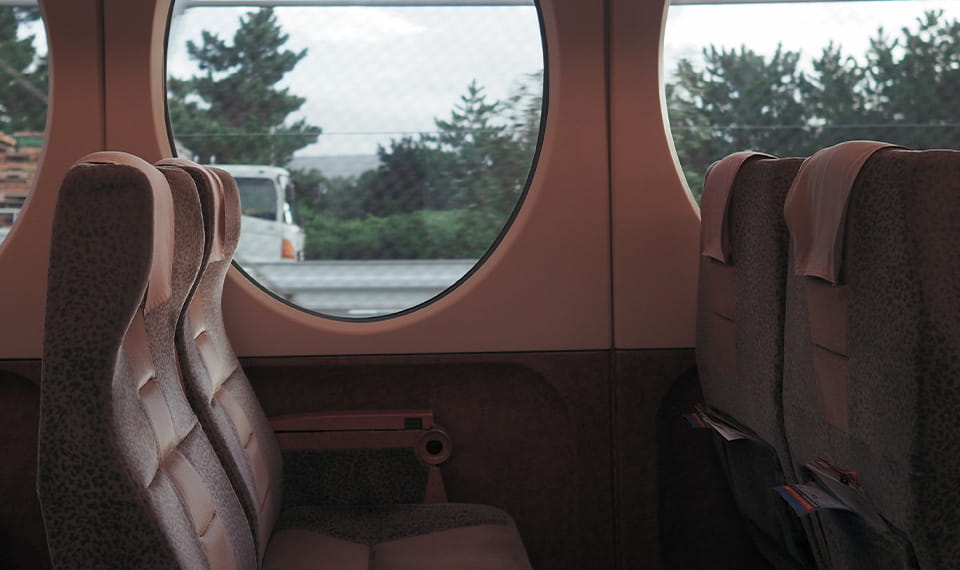 What Should I Do With My Luggage?

On the bullet train, there are overhead racks that will fit medium-sized suitcases. However, if you have a lot of luggage or would simply rather not carry it yourself, you have the option of an overnight courier service. This is a widely used service throughout Japan and means your luggage will be transported from one destination to another, without you having to take it on the train. This service is very reliable and hassle-free, however, please note that it does take 24 hours for your luggage to be delivered.

Japan is one of the most fascinating destinations in Asia and this classic itinerary is perfect for those wanting to experience the delightful diversity of the country, with stops at the main highlights of Tokyo, Kyoto, Hiroshima and Hakone.

Japan is most often praised for its incredibly rich culture and history with its natural beauty often being overlooked. This itinerary shows you a different side to Japan, taking in the best of country's most inspiring cities and combining them with the Nakasendo Walking Trail, an ancient postal route through wild forests, and the beautiful...

Designed to appeal to both adults and children alike, this awesome trip takes in the neon-lit metropolis of Tokyo, with its distinctive cultural traditions of kawaii (cute), anime and cosplay, cycling in the Japanese Alps, a stay in a traditional Japanese ryokan inn and cooking class in Kyoto. Full of memorable experiences and contrasting...

Adventure Off the beaten track

An action-packed adventure for all the family, this itinerary is ideal for those looking to experience Japan’s highlights during a half-term break or combined with a Southeast Asian beach vacation. Experience the neon lights, avantgarde pop culture and iconic sights of Tokyo, stay in a traditional Japanese ryokan set in the natural beauty of rural...

Ignite your senses as you take this awe-inspiring trip through Japan in limitless luxury. An eclectic mix of modern and traditional, tranquil yet vibrant, lose yourself in the skyscrapers, with samurai and sake to be savoured. All with exceptional private guiding and stays at some of the most exclusive hotels and ryokans in Japan, this is the...

Dive straight into the buzz and throng of life in Japan with this epic trip full of immersive experiences. Staying in the very best spots for cultural highlights and unique diversity, this trip is also perfect for foodies, venturing through the country led by your taste buds. With such an array of regional cuisines and cooking styles, you’ll be...

This beautiful itinerary allows to you experience Japan in its most famed and spectacular season, Sakura, when the beautiful Cherry Blossoms blanket the country. Taking you throughout the island of Honshu, visit Japan in spring to see the beautiful cherry blossom in full bloom. This itinerary takes you to Hakone National Park and Miyajima Island,...

Savor the opportunity to explore Japan through its world-class cuisine on a food-focused tour of the country’s greatest culinary cities. Awarded heritage status by UNESCO, traditional Japanese food is both an art form and an integral part of the country’s cultural heritage. Experience the rituals and exquisite presentation of kaiseki dining, enjoy...

Travel has always been a large part of my life, a passion ignited from my first visit to Russia as a child and my subsequent relocation to Moscow in 2010. After spending five years exploring this amazing, vast country and immersing myself fully in the culture and learning the language, I began my professional travel career at Scott Dunn in 2015.