Discover the wonders of Egypt on this classic tour, taking in all the highlights including bustling Cairo, ancient Luxor, the Red Sea coast, and a magical cruise along the mighty River Nile.

Price Guide: ( based on double occupancy and includes international flights)

Begin your journey in Cairo, Egypt’s vibrant capital where ancient architectural monuments contrast against modern skyscrapers overlooking the banks of the River Nile. Settle in for two nights at the palatial Mena House, situated in the shadow of the great Pyramids of Giza on the outskirts of Cairo.

The next day, uncover the secrets of this ancient city with a full day guided tour. Delve into the rich and fascinating history of Egypt as you explore the Pyramids of Giza, now the last standing of the Seven Wonders of the World. Continue to the colossal Great Sphinx, carved from a single piece of limestone to form what is still among one of the world’s largest sculptures. You will also have the opportunity to explore the ancient burial grounds at Sakkara, where archaeologists continue to make fascinating discoveries. This sprawling necropolis is home to the remains of pyramids, temples, and tombs that span the history of ancient Egypt. 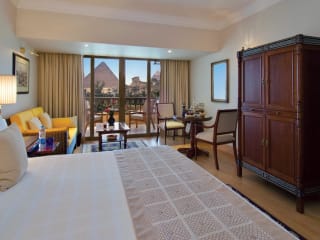 Flying from Cairo to Aswan, you will be whisked from the airport to check-in at your hotel for the next two nights – an opulent 19th century former palace on the banks of the Nile. The southern frontier of ancient Egypt, discover the delights of Aswan where the rolling dunes of the Sahara meet the powerful River Nile, dotted with countless feluccas (traditional boats) sailing up and down. Visit the famed Aswan High Dam, which was constructed for the dual purpose of economic development and the preservation of cultural heritage. Opened in 1970, the dam generates huge amounts of hydroelectric power and controls the annual Nile flood, thus providing protection to some of Egypt’s most important Pharaonic monuments. Discover the site of one such monument, the Temple of Philae, which was painstakingly transferred piece by piece from Philae Island to Agilkia Island in the 1960s while the dam was being constructed. Dedicated to the goddess Isis, wander through this superb temple complex which was an important sacred site to the ancient Egyptians, Greeks and Romans. 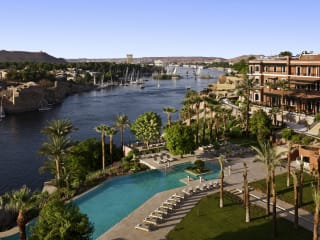 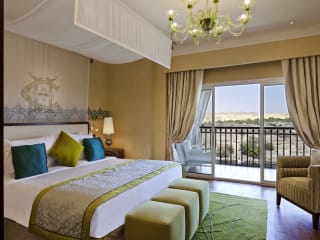 This morning, you have the option to visit the incredible site of Abu Simbel on the shores of Lake Nasser, home to two temples built by the renowned Egyptian king Ramses II. Marvel at the four immense statues that guard the main temple entrance, which are some of the largest surviving Pharaonic sculptures and an incredible example of ancient Egyptian art.

Later today, step on board a luxurious ship which will be your home on the Nile for the next four nights. Embark on a magical cruise along the world’s longest river – a truly incredible way to experience the ancient wonders of Egypt. Enjoy an afternoon sailing around the islands of Aswan on a smaller and more traditional felucca boat, before returning for an evening of culinary indulgence on board the ship.

Over the next few days, discover some of Egypt’s most magnificent sites as you cruise down the Nile. Wander through the towering colonnades of the temple of Kom Ombo, rising dramatically from the banks of the river. Gaze in awe at the incredibly well-preserved sandstone walls of the Temple of Horus in Edfu. Sail to Esna, an important town for the ancient Egyptians, before ending your cruise in Luxor, formerly the ancient city of Thebes. For your final day on board, disembark to explore Luxor’s Valley of the Kings – a burial site for ancient pharaohs where archaeologist Howard Carter first discovered Tutankhamun’s tomb. Continue to the corresponding Valley of the Queens, where the tomb of Nefertari, the first wife of Ramses II, can be found. Explore the magnificent Temple of Hatshepsut and be awed by the monumental Colossi of Memnon statues. These two giant statues were built in honour of Amenhotep III but somewhat confusingly are named after the Greek hero Memnon.

Disembark from your river cruise in Luxor, with one night at the Winter Palace which has played host to notable figures throughout the years including Agatha Christie. Enjoy a guided tour through the East Bank of Luxor, uncovering the world’s largest open-air museum. Explore the vast Karnak Temple complex, stroll along the Avenue of the Sphinxes past imposing statues and towering obelisks, ending at the impressive riverside Luxor Temple which formed the most important religious center in ancient Egypt.

This morning you will be driven to Hurghada, once a tiny fishing village which has since grown into a popular resort on the Red Sea’s west coast. Enjoy the next five days at your leisure, unwinding on golden sands or plunging into a colorful underwater world. The warm, breezy weather here lends itself perfectly to sailing, wind surfing and kite surfing. 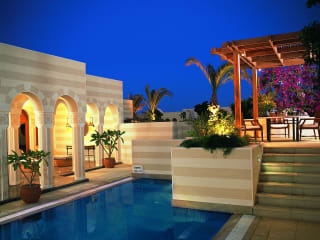 As the grand finale to your Egyptian journey, fly back to Cairo for one last day of discovery. Glimpse into the very best of Cairo, including the Egyptian Museum which hosts a staggering collection of 120,000 exhibits and explore the less visited but charming Islamic Cairo. Enjoy some last-minute shopping as you wander through the vibrant Khan-el-Khalili bazaar bursting with fabrics, spices, antiques and musical instruments before flying home.

The Mena House is a large and palatial hotel, situated in the shadow of the great Pyramids of Giza on the outskirts of Cairo. Its own rich and colorful history is reflected in its ornate interiors and it, without doubt, boasts the best view in Cairo.

The Oberoi Philae offers a luxurious cruise along the Nile that sails past the landmarks of an ancient civilization. The elegant cruiser sails from Aswan to Luxor or vice versa and courses through Pharaonic dynasties that span thousands of years.

The Sofitel Winter Palace is steeped in Egyptian history. Built in 1886, it has hosted world leaders throughout the years as well as notable figures such as Agatha Christie, and the 5th Earl of Carnavon whilst excavating Tutankhamun's tomb in 1922.

A more recent addition to the city skyline, St. Regis Cairo is one of the more luxury accommodation options in the city, offering lavishly appointed rooms, abundant dining and first-class facilities on the bank of the Nile.