From museum hopping on the Upper East Side to bar hopping in Brooklyn, New York has it all for the perfect city break. North America specialists, Camilla and Fran, recently returned from the Big Apple, discovering the very best of New York’s downtown. No longer just a financial district and the location of the infamous Wall ...

From museum hopping on the Upper East Side to bar hopping in Brooklyn, New York has it all for the perfect city break. North America specialists, Camilla and Fran, recently returned from the Big Apple, discovering the very best of New York’s downtown.

No longer just a financial district and the location of the infamous Wall Street, downtown New York is newly abuzz and rapidly becoming a ‘must stay’ area in the city. Favoured by locals for its vibrant restaurant scene, nightlife and summer pop-ups, downtown New York is seeing a real revival with new luxury hotels opening in this previously overlooked area. The area feels less financial and far trendier than imagined, and we discovered there was so much to explore in this lively neighborhood where old meets new.

Within the last year or so, downtown NY has seen the opening of two luxury hotels; The Beekman, a historic boutique hotel, and the brand new Four Seasons Downtown.

Originally an old theater (where Shakespeare’s Hamlet was first performed), and later Clinton Hall, New York’s first public library, The Beekman has undergone a meticulous four-year renovation. The talking point of this hotel is its stunning central atrium and pyramid skylight – a hit on Instagram already! It has two fantastic restaurants to choose from too; Augustine is a stylish French brasserie by Keith McNally of Balthazar fame, and then there is also Temple Court from acclaimed chef and restaurateur Tom Colicchio. 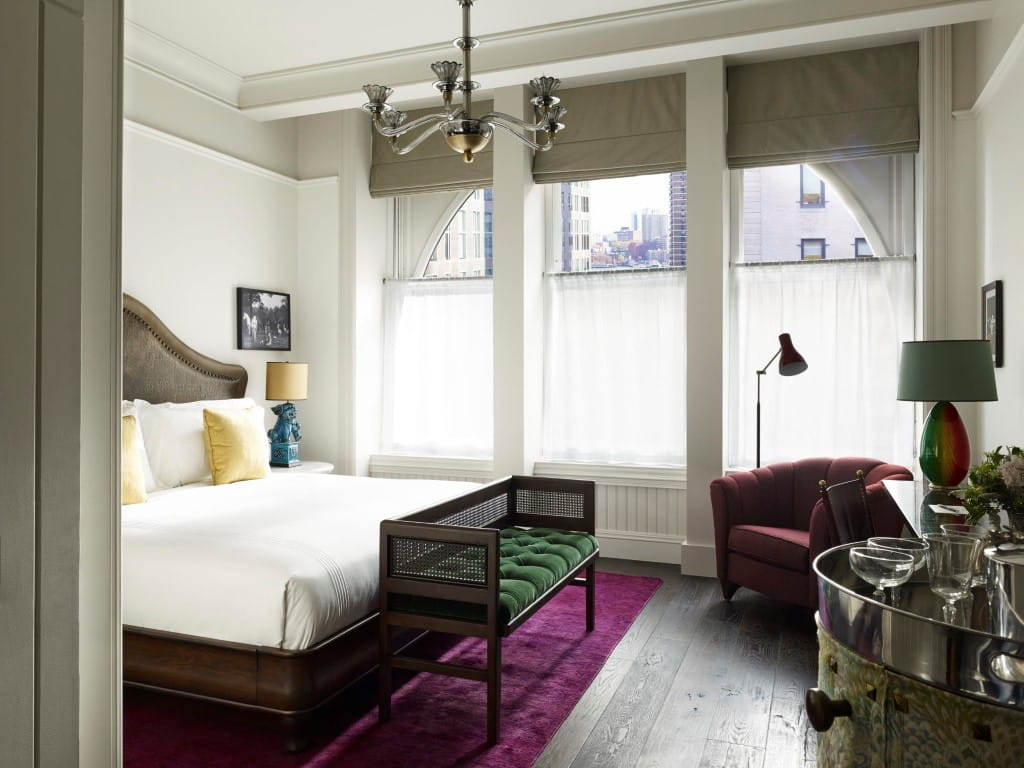 Deluxe King at the Beekman 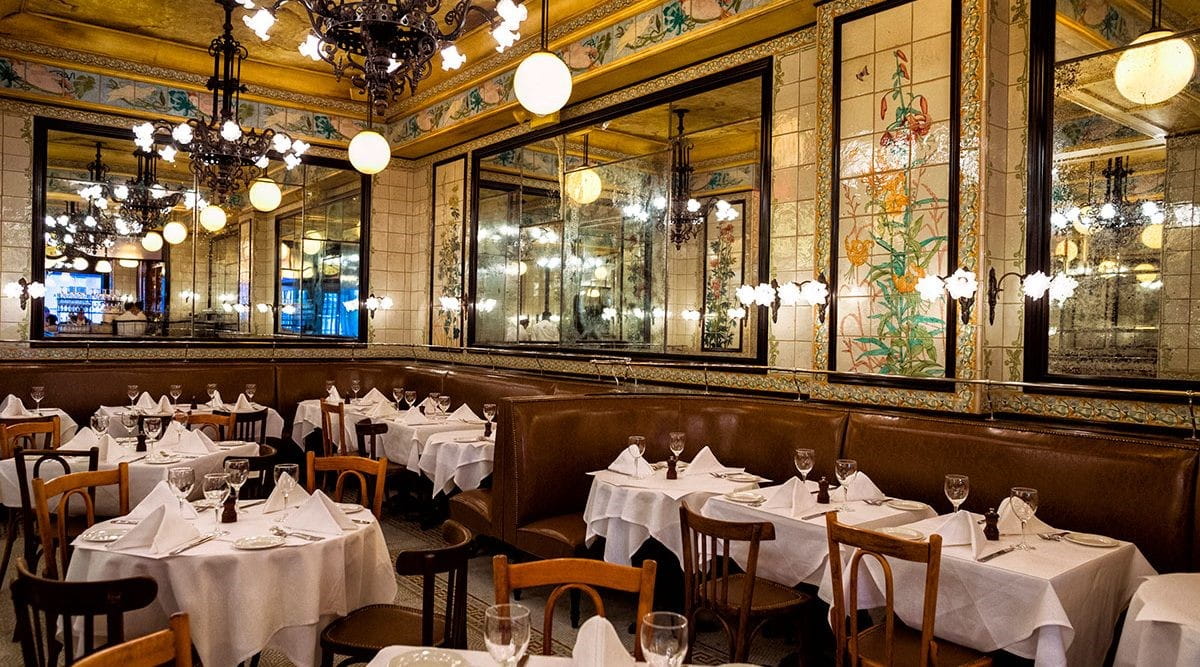 Restaurant at the Beekman 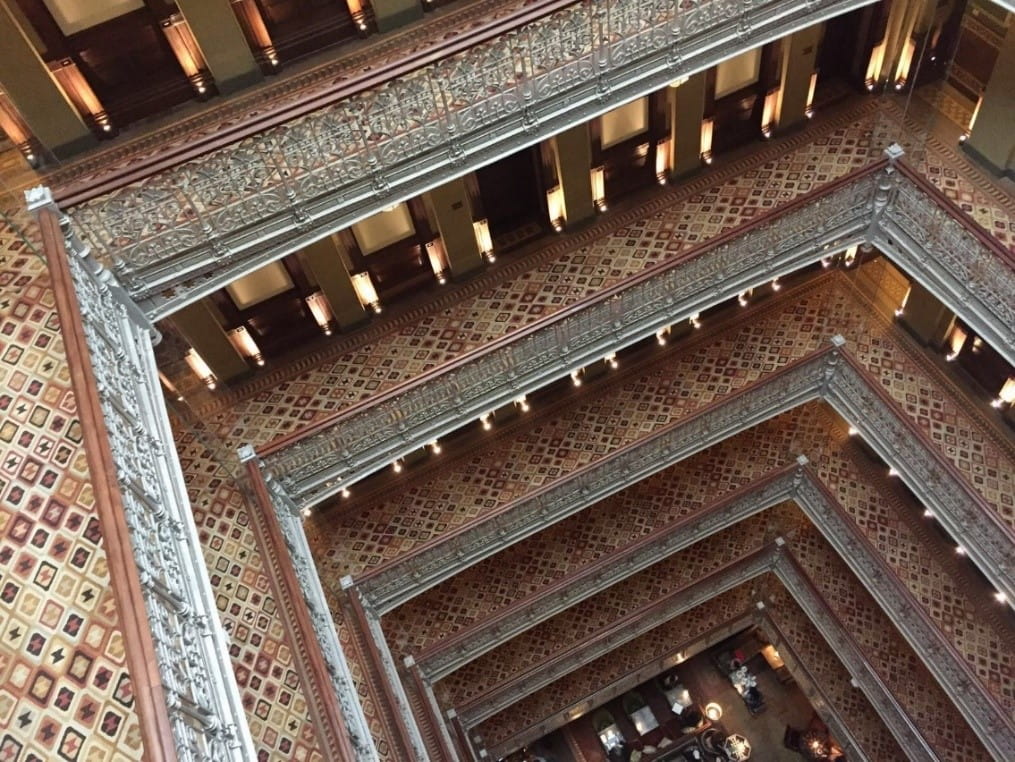 Just on the other side of City Hall Park, is the brand new Four Seasons. With impeccable service and excellent facilities (including a luxurious spa and lap pool complete with underwater music), it provides guests with the perfect spot for a bit of relaxation and pampering after a busy day exploring the city. 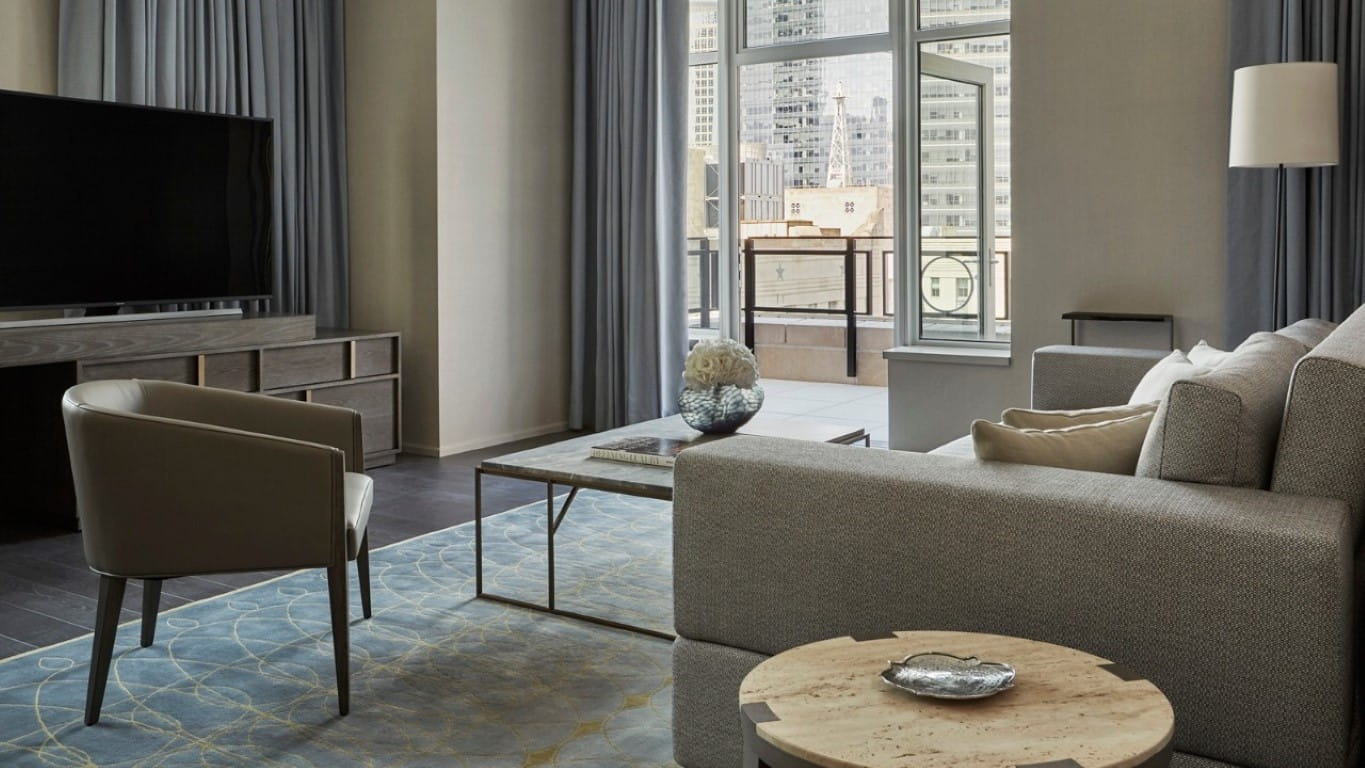 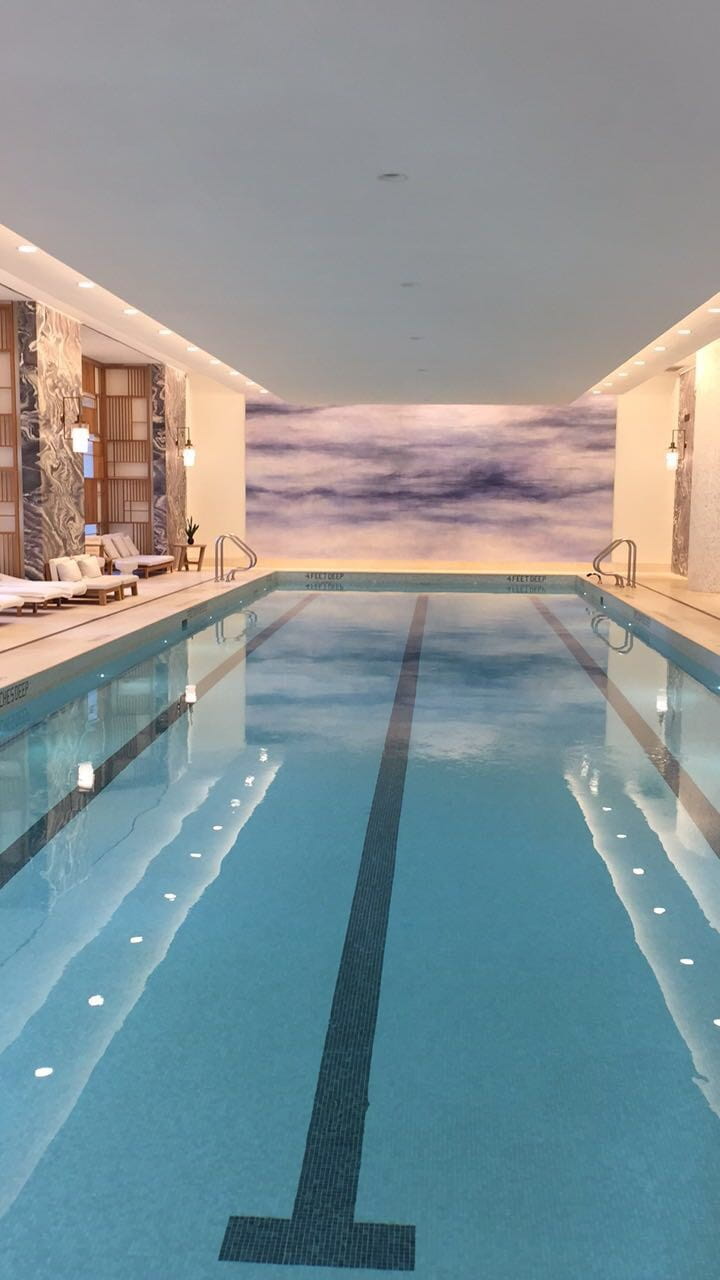 Foodies will not be disappointed with the reams of Michelin-starred restaurants to choose from – you will certainly not go hungry in downtown! We were amazed to find 20 Michelin starred restaurants within a two-mile radius of the Four Seasons Downtown and The Beekman.

If Italian cuisine is your thing, then Eataly is well worth a visit. Located in the historic, financial district, this is the second Eataly to open in the city after the success of the first one in Flat Iron. It is a buzzy Italian market with a mix of artisan food counters, market style shopping, cafes and restaurants. The perfect place to buy fresh produce, an array of Italian classics and eat the freshest food which is prepared in front of you. Open from 7am – 11pm this is great option for both sit-down and grab-and-go menus. 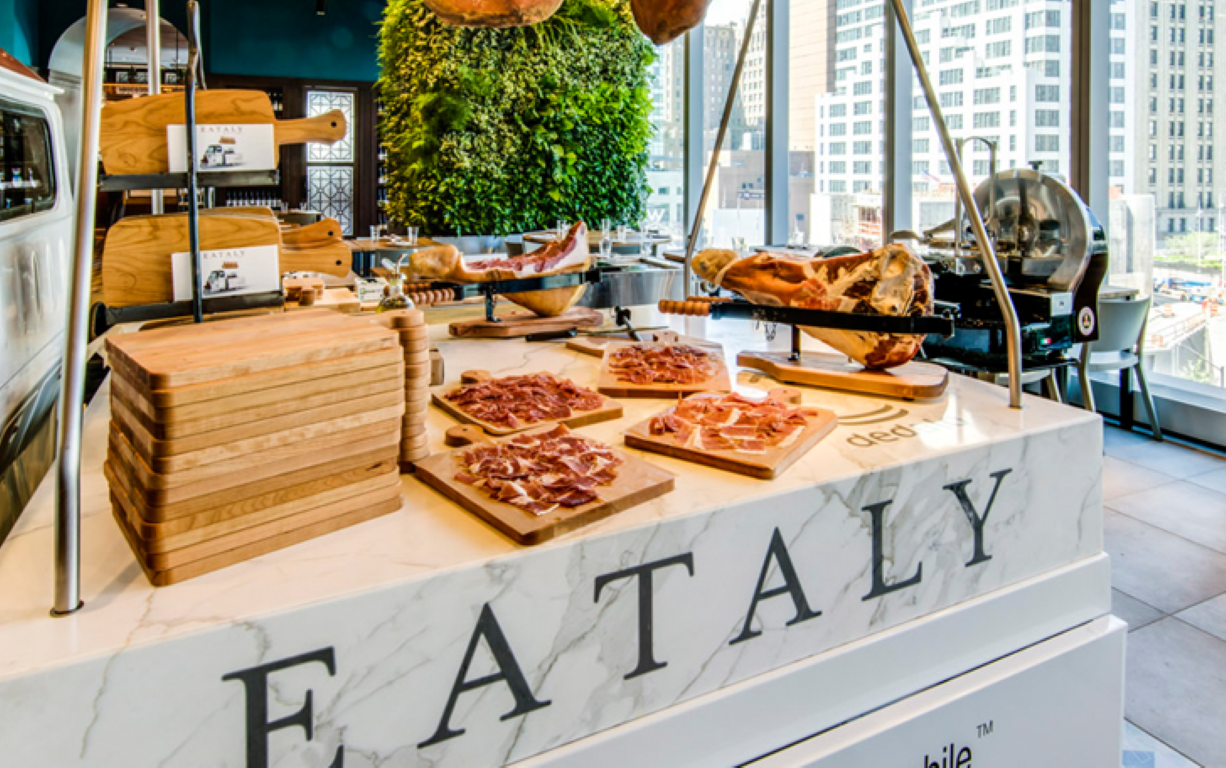 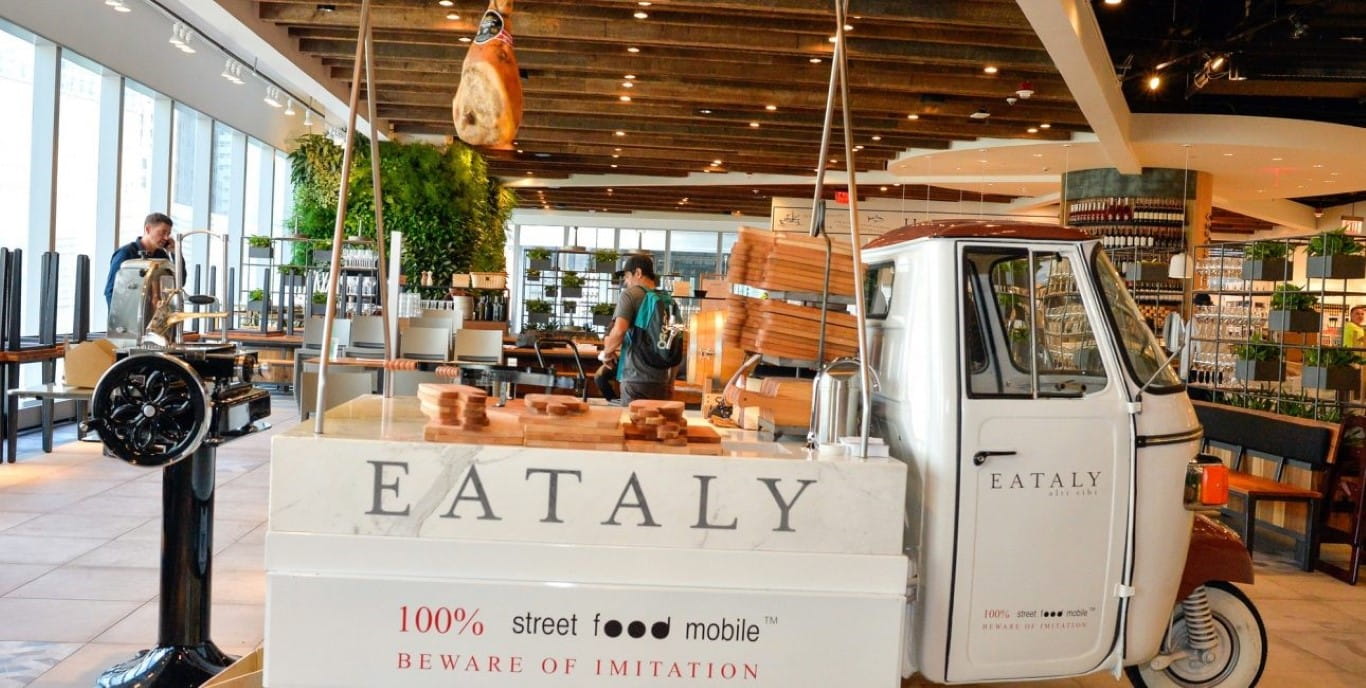 In the summer months, be sure to head down to South Street Seaport to enjoy the seasonal pop ups with friends – a fun mix of culinary experiences and music on the historic cobblestone streets, as well as beer and rosé on tap at the Garden Bar! Look out for ‘by CHLOE’ and Corso Como coming soon!

The neighborhood is now home to the 9/11 Memorial and Museum. Sitting in the footprint of where the Twin Towers once stood, the waterfalls and twin reflecting pools are a poignant but beautiful reminder of the events of 2001 and the lives lost. We strongly recommend a trip up the One World Observatory, in which ‘Sky Pod’ elevators whisk you up to the 102nd floor, and you can enjoy some of the best views of Manhattan. Next, head down to Battery Park and take the ferry across to Ellis Island with Statue Cruises to learn about New York’s fascinating immigration history. Then, take some time to visit Fraunces Tavern, a historic landmark which was the first tavern in America and the where George Washington bid farewell to his troops.

No trip to New York is complete without a boat trip, giving you the opportunity to take in the city from another perspective. Basing yourself in downtown, means only an easy stroll down to North Cove Marina to enjoy a private boat trip on the Hudson and East rivers. NY Media Boats can whisk you out on the water to explore the Hudson, see the New Jersey coastline, head under Brooklyn Bridge and get up close to the uninhabited National Monument of Governors Island, the Statue of Liberty and Ellis Island. Scott Dunn can book this trip for you on a private basis, and your guide will stop at the all the best spots for the perfect photo opportunities. 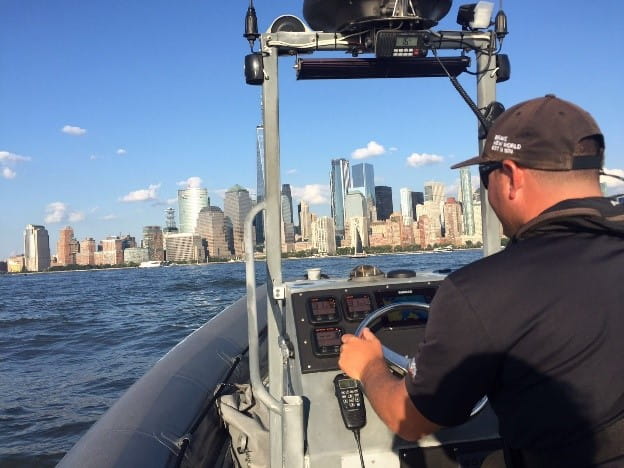 Cruise of the Hudson 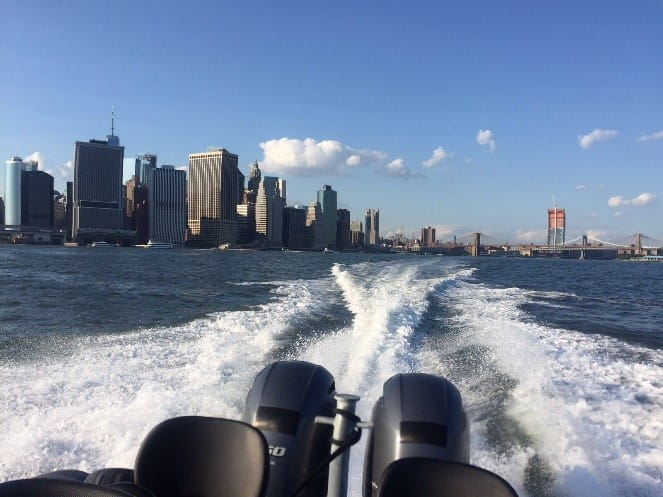 Views of Manhattan from the Hudson

If that sounds a little too adventurous, why not head to the shops! Downtown is quickly earning its stripes as the new shopping destination in New York City. The Westfield World Trade Center and Brookfield Place, linked by the impressive dinosaur-like ‘Oculus’ structure (the new transit hub), offer everything and anything you could desire from high street to high end. After a hard day of shopping you can enjoy drinks alfresco along the river front at the Marina, just steps from the shopping center. 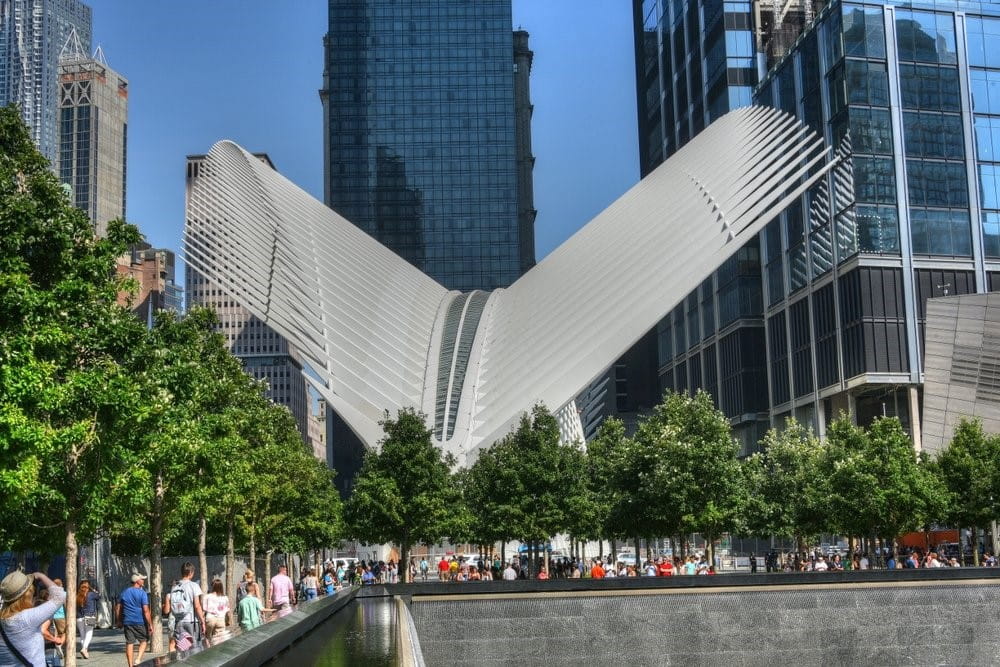 Being downtown of course means you are well located to pop over and explore the hip and trendy district of Brooklyn – either a 30-minute stroll over the bridge, or hop on a ferry to the Dumbo ferry terminal. Walking over the bridge is a fun experience and a reminder of the city’s history of architectural innovation; when built in 1883, it was the first structure to span the East River and, at the time, the longest suspension bridge in the world. We grabbed a coffee to go one morning, and enjoyed the walk over to Brooklyn, taking in the spectacular views of lower Manhattan and the city’s skyline. 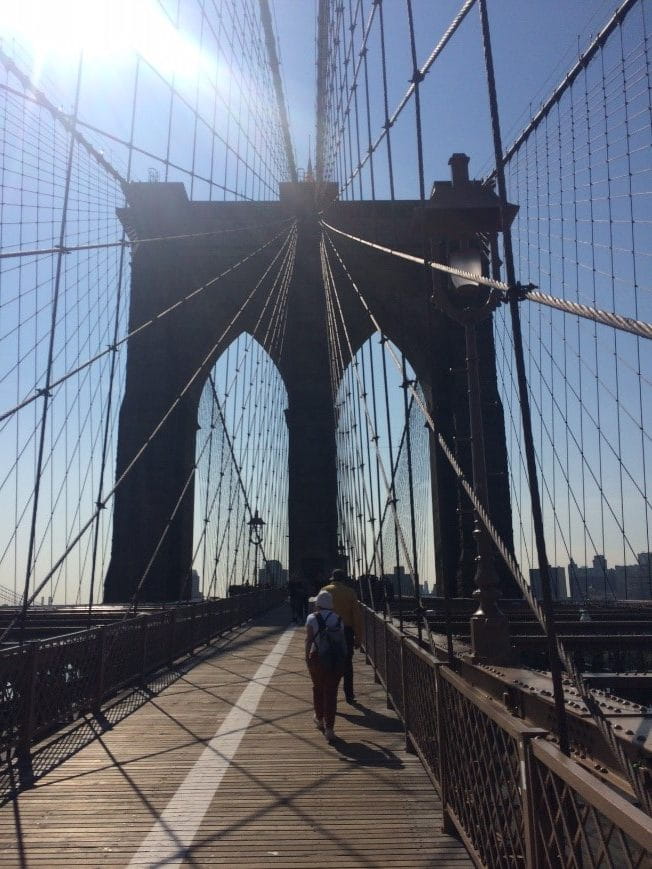 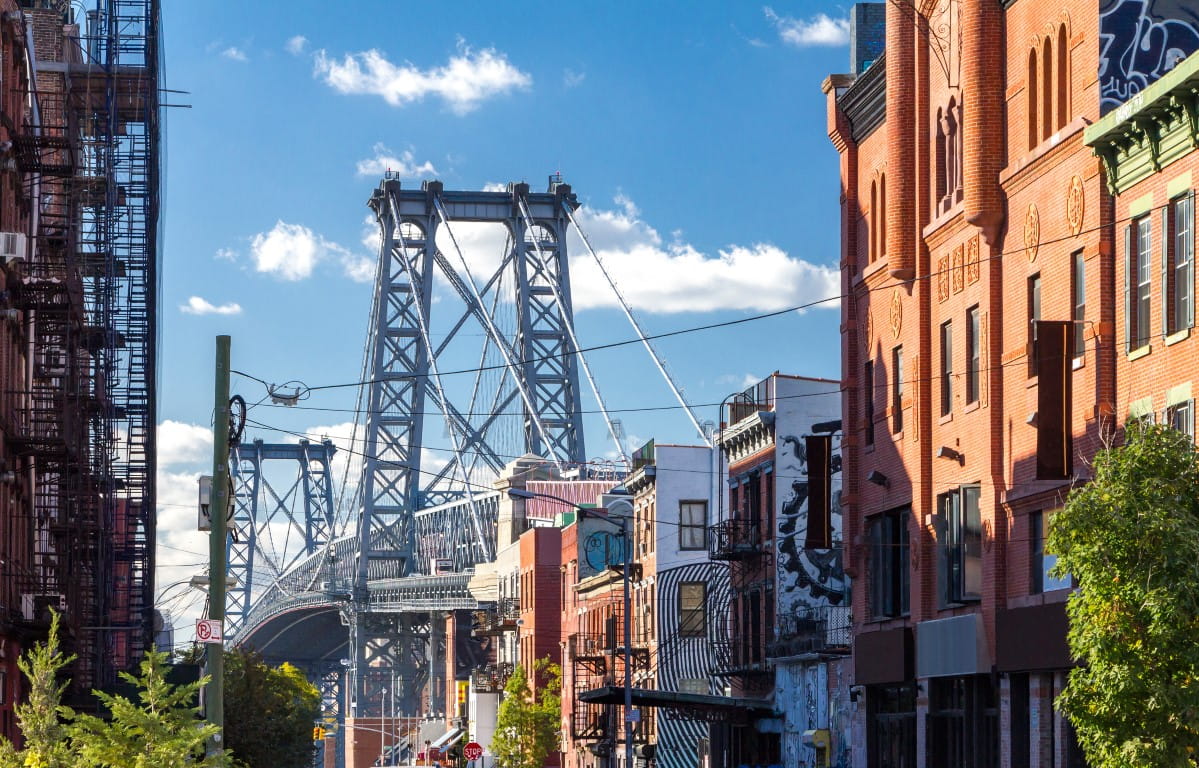 Once over there you can enjoy the leafy streets of Dumbo, Brooklyn Heights and Brooklyn Promenade, as well as the verdant oasis of Brooklyn’s Botanic Garden. When the sun’s shining, the 1 Hotel Brooklyn Bridge offers the perfect spot to soak up the rays and enjoy the awesome views of Manhattan from their stylish roof top bar. There are plenty of great spots for a late lunch or evening meal nearby, such as the newly opened Cecconi’s in Dumbo or the popular River Café nestled riverside under the Brooklyn Bridge, with a classic new American menu. 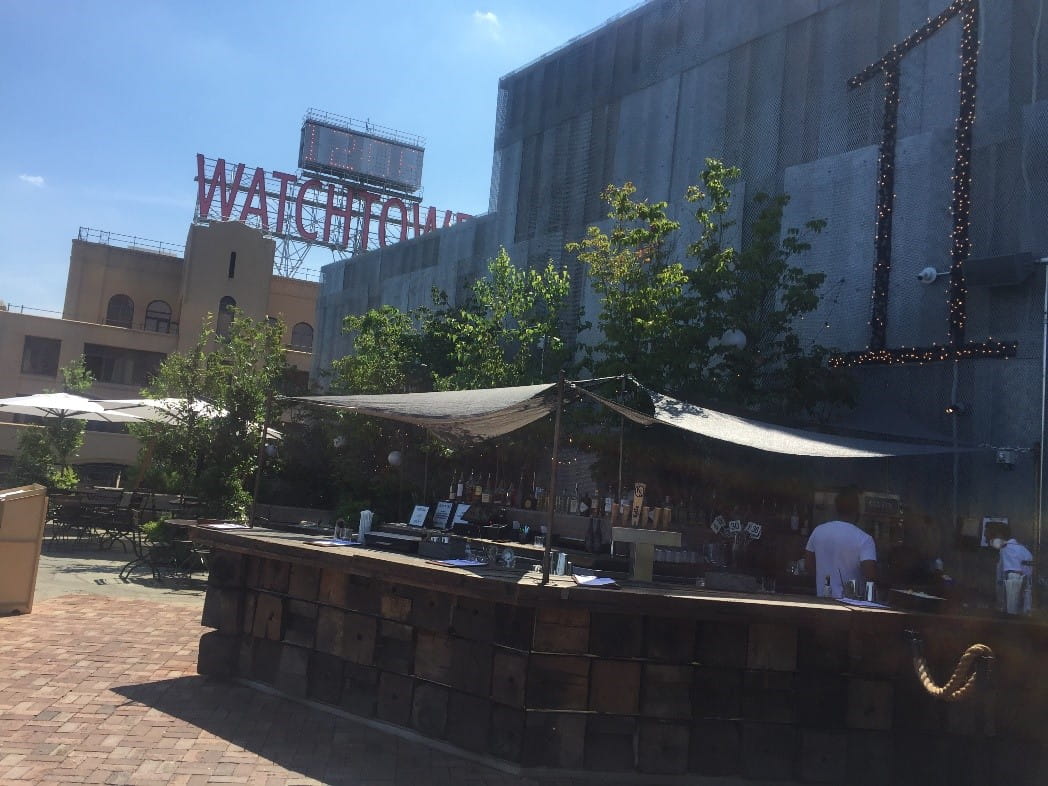 A choice of bars & restaurants overlooking the river 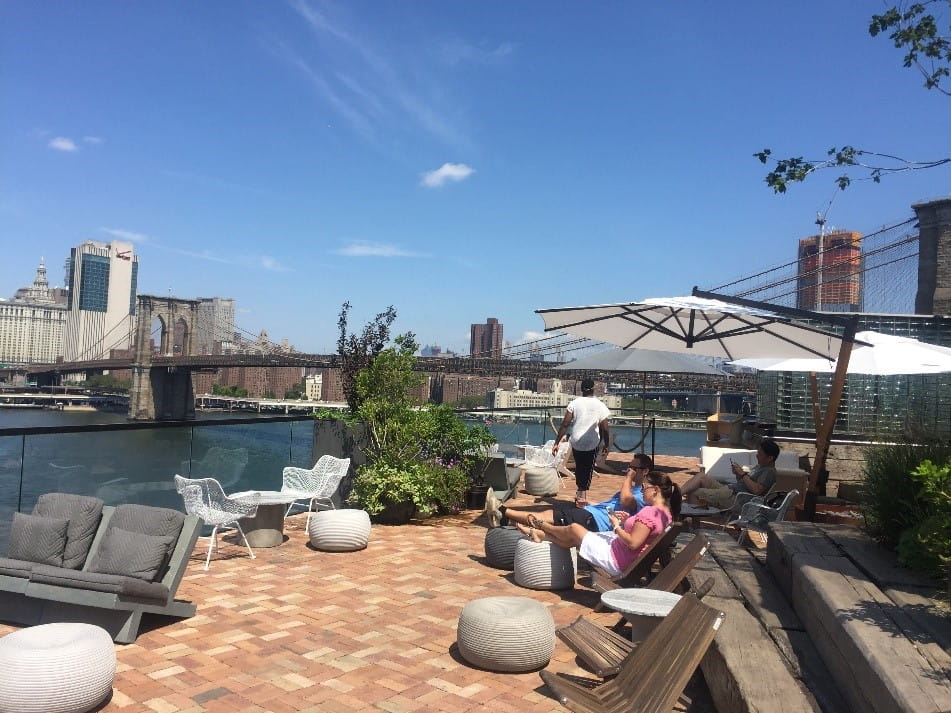 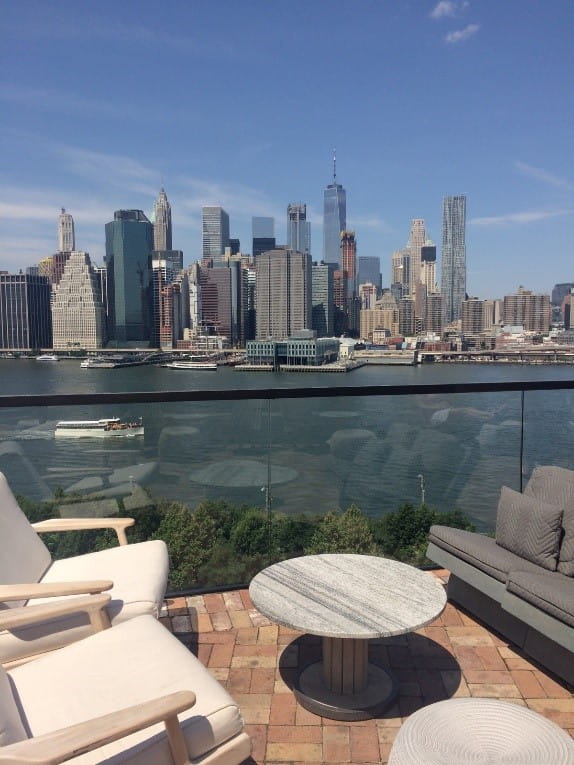 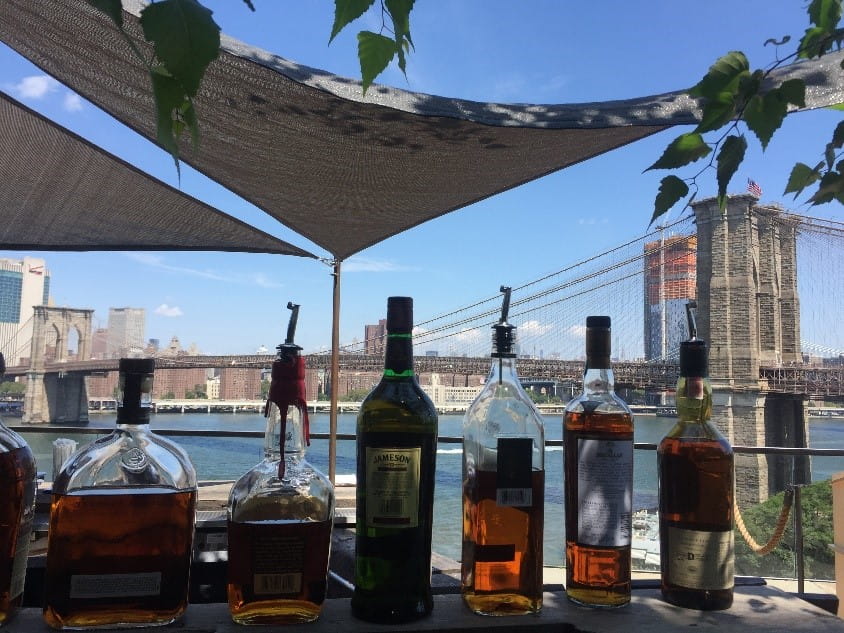 This entry was posted in North America, and tagged New York, The Beekman,